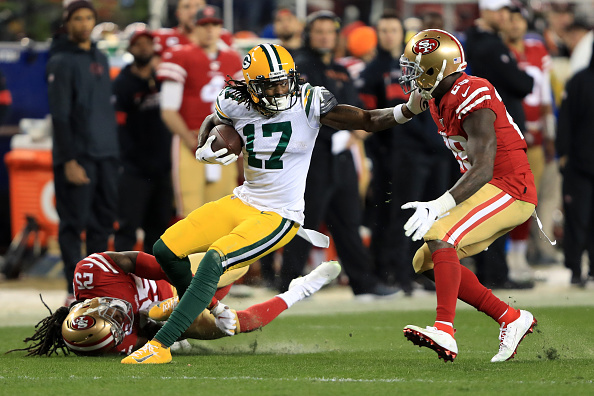 Adam Ronis looks at the props he likes and dislikes for the 2020 NFL season and weighs in with his takes!

When you are putting wagers on player props or team totals, make sure you check different books. The numbers vary quite a bit and always shop to get favorable numbers. Here are a few that stand out to me with the season about to start.

Adams had double-digit touchdowns in three straight seasons before scoring five last season. He missed four games with a turf toe injury and wasn't fully healthy upon his return. He still had 127 targets in 12 games. Over the final nine weeks, Adams had a target share of 31-percent. The Packers didn't add any receivers and Adams is going to receive a lot of targets.

After a solid rookie year, Mayfield regressed and played poorly in his second season. The offensive line wasn't good and neither was the play calling. The offensive line has been upgraded and Mayfield will play for his third head coach in three seasons. It's clear what Kevin Stefanski wants to do and that's run the football a lot. The Vikings ran the ball 49.3-percent of the time last season. Kirk Cousins passed for 3,603 yards under Stefanski last season. Mayfield passed for 3,725 yards as a rookie and 3,827 last season. The Browns are expected to run a lot of 12-personnel and have two excellent running backs with Nick Chubb and Kareem Hunt.

Allen rushed for eight touchdowns in his rookie season two years ago over 12 games. Last season, he rushed for nine in 16 games. Allen had 11 rushing attempts inside the 10-yard line and scored eight times. It will be very difficult to be that efficient again. Frank Gore was unsuccessful near the goal-line last season and the Bills drafted Zach Moss, a big back that will be given some touches near the goal line.

In 13 games last season, Ridley had 93 targets and caught 63 passes for 866 yards. The Falcons didn't add any wide receivers in the draft and this shapes up to be a pass-heavy team. Ridley saw almost two more targets per game after Mohamed Sanu was traded last season. Ridley had some big weeks when Austin Hooper was out and he signed with the Browns. Ridley plays opposite Julio Jones, who draws the better cornerbacks and Ridley was on pace for 1,000 yards before getting hurt. This is a breakout season for Ridley.

The Rams were excellent in the first two seasons with Sean McVay as head coach, losing in the Super Bowl in his second season. They disappointed last season, missing the playoffs with a 9-7 record. The offensive line was a problem and the defense took a step back. The Rams play in a tough NFC West with the 49ers, Seahawks and the improving Cardinals. The Rams lack depth and will have a difficult time winning nine games.

The key for the Steelers is the health of quarterback Ben Roethlisberger. He injured his elbow in Week 2 last season, had surgery and missed the rest of the season. He's healthy and ready to go and is 38-years old. The backups aren't good, yet the Steelers defense was so good last season they managed to win eight games. The Steelers have one of the best defensive teams and an easy schedule. As long as Roethlisberger stays healthy, this team will succeed.

The Jets finished the season strong to get to seven wins last season despite one of the worst offenses in football. They had one of the easiest schedules last season and have one of the more difficult ones in 2020. They open with the Bills, 49ers, Colts, Broncos, Cardinals, Chargers, Bills and Chiefs. The defense took a big hit with the trade of Jamal Adams and C.J. Mosley opting out. Add in Adam Gase being the head coach and there isn't much to like here.

Hat tip to Craig Mish on this one. I looked into it and it made sense. The Lions had some awful luck last season. They led in the first half in 11 games last season and eight going into the fourth quarter. They were 3-7-1 in one score games. They almost beat the Chiefs, losing 34-30. They had a lot of injuries, including quarterback Matthew Stafford, who missed eight games. The defense was improved through free agency and the draft. They have one of the easier schedules and the division is not strong.