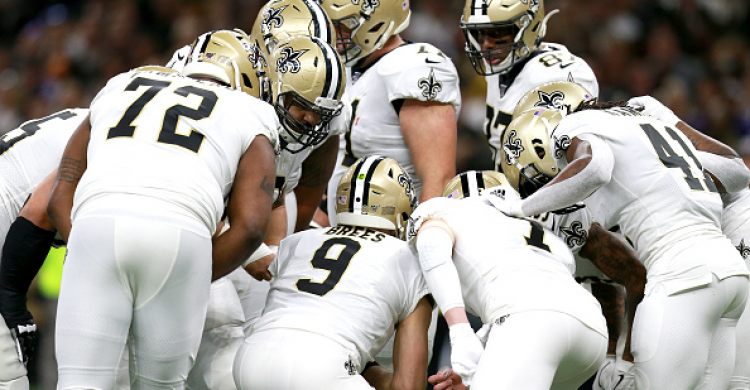 The NFC South made the biggest waves this offseason with some massive shakeups at the quarterback position as the Buccaneers won the Tom Brady sweepstakes and the Panthers moved on from Cam Newton and signed Teddy Bridgewater to be their new man under center. The Falcons signed Todd Gurley and the Saints re-signed Drew Brees and landed Emmanuel Sanders in free agency to give him a legit No.2 receiver to go opposite Michael Thomas.  New Orleans won the division last year and open as the favorite again this year but, there is certainly a reason to consider at least one other team an actual contender.

The Saints went 13-3 in 2019 as they ran away with the NFC South, owning the only winning record in the division. Drew Brees only appeared in 11 games due to injury but he was stellar in those 11 games, throwing for 2,979 yards with 27 touchdowns and just four interceptions while owning a league-best 74.3-percent completion percentage. There was some question this offseason as to whether or not Brees was going to hang it up but the now 41-year-old QB agreed to return to the team. The Saints offense is well balanced with Alvin Kamara and Latavius Murray in the backfield and Michael Thomas leading the league with 149 catches and 1,725 yards. To help bolster the passing attack the Saints were able to sign Emmanuel Sanders and he will slot in as the No.2 receiver which is something the Saints have really lacked.

The Buccaneers went 7-9 last season with six of their nine losses finishing within seven points of the opponent. Why is that significant? Well, for one, it showed that the team played in some competitive ball games but also one has to think that Jameis Winston and his 30 interceptions likely played a hand in at least a few of those losses. The turnovers not only kill any momentum the offense is building but also strains the defense who is constantly going back on the field. In total, Winston had 39 turnovers while totaling just 34 touchdowns. That’s not what you are looking for. The Buccaneers agreed and moved on from Winston this offseason and signed Tom Brady in free agency….Yes, THAT Tom Brady. After 20-years in New England, Brady will be donning a new jersey. Now, Brady certainly isn’t the man he once was but he still makes the right decisions with the football and will make more good than bad football plays when on the field. This can only help the Bucs offense who may now lack the explosive down field passing attack but also won’t have drives abruptly end due to a throw into triple-coverage. 2019 was a down year for Brady as the Patriots offense was often injured but he still threw for 24 touchdowns with just eight interceptions. The Buccaneers will give Brady a ton of weapons as well with Mike Evans, Chris Godwin, O.J. Howard and Cameron Brate.

While the focus is going to be on how the offense looks, I don’t think you should sleep on this Tampa defense either who was strong at times and should benefit from not having to be on the field as often. At +200 this is certainly a good bet and I think the OVER on the 9 wins is something we should be looking at as well.

It’s quite possible that Super Bowl LI broke the Atlanta Falcons. Yes, the team made some coaching and personnel changes since then but since that Super Bowl loss to the Patriots the team has gone 10-6, 7-9 and 7-9. Matt Ryan had an okay year in 2019, throwing for 4,466 yards with 26 touchdowns and 14 interceptions. The team’s running game was almost non-existent and the defense was among the worst in the league. Julio Jones and Calvin Ridley were solid as was Austin Hooper but Hooper is now in Cleveland. To replace Hooper the Falcons traded for Hayden Hurst and to help the running attack the team signed Todd Gurley.  The defense could still use some work but they did sign Dante Fowler to help the pass rush.

Figuring that Buccaneers are going to be better this season I find it hard to think the Falcons have enough to overcome both the Bucs and Saints to take the division so while +600 is enticing I will have to pass there. OVER 7.5 wins at -125 isn’t awful but still not exactly the bet odds in my opinion.

The Panthers had a wild offseason which started with Luke Kuechly retiring and finished with the release of Cam Newton. In between, they lost cornerback James Bradberry and defensive linemen Mario Addison as well which further hurts the team’s defense. To replace Cam Newton the Panthers signed Teddy Bridgewater to a three-year deal to be their next QB. Bridgewater is a fine game manager but lacks the explosiveness that Newton brought to the table. With Bridgewater under-center, we should expect to see even more Christian McCaffrey while the likes of D.J. Moore and Curtis Samuel may take some hits due to the lack of downfield passing. That said, Bridgewater is a very accurate QB that can live with the intermediate throws.

Carolina is a long shot for a reason, I wouldn’t even make a lottery ticket bet to have them win the division. Vegas odds favor the under 5.5 wins and that is hard to dispute as I’d be surprised if they win a division game this year.