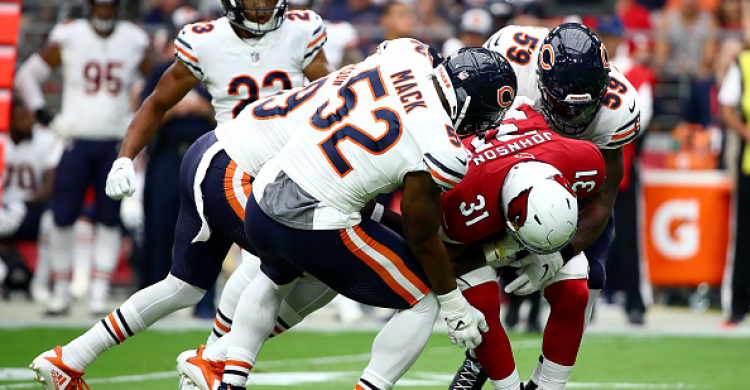 The North is the closest division in terms of Vegas odds in the NFC Conference and it makes a lot of sense as each team has their share of problems that really leaves it as an unknown who will be coming out on top. Now, I know the Packers went 13-3 last year but it was a rather unimpressive showing the majority of the time and they benefitted from having a somewhat soft schedule, drawing the NFC East and AFC West opponents with a one-off divisional game at home against a Cam Newton-less Carolina Panthers. Finishing second at 10-6 was the Minnesota Vikings who should have been the team to beat but issues at the QB position early on and injuries to the wide receiver position late caused some offensive but even the defense was shaky down the stretch as the Vikings lost three of their final five games. The Bears had playing calling issues from the get-go as they never were able to utilize rookie running back David Montgomery and Mitch Trubisky actually regressed from his sophomore season as he completed 63-percent of his passes for 3,138 yards with just 17 touchdowns and 10 interceptions. As for the Lions, well, they are the Lions. Injuries across the board did them in with Matthew Stafford and Kerryon Johnson suiting up for just eight games each.

As each team enters the 2020 season their continues to be questions surrounding each. The Packers are currently the favorite to win the division but at +125 while the Vikings, Bears and Lions follow suit with odds of +225, +300 and +900.  Let’s break down the best bets here.

The Packers may have had an easy draw schedule wise in 2019 but 2020 will be on a bit of a different level with the NFC North playing the NFC and AFC South divisions. By finishing 13-3 the Packers also draw the 49ers and Eagles to fill out their schedule as the other division winners from last year. The NFC South this year added Tom Brady to the Buccaneers, not sure if you heard that news or not and of course it still has the Drew Brees led Saints while the AFC South has the Texans, Titans and Colts who should all pose tougher tests.

The Packers passing attack really struggled following the injury to Davante Adams and the team has done little to address the receiver position after Adams in terms of adding any key players. Sure, Devin Funchess can be a big endzone presence but let’s get real here, it is still Devin Funchess. The running game thrived under Aaron Jones and though Aaron Rodgers still look strong at age 36 it does make sense for the Packers offense to again feature the run to open up the passing game when viable.

For me the telling sign here is that Vegas is giving you the same odds on the Packers win total of 9.5 wins. They too are not sure where to go. I think it’s likely always a decent play to get plus-money on the Packers to win the NFC North so maybe a small play at +125 is worth it but I won’t touch that win total.

Minnesota made a big move this offseason and maybe not for the best by trading away Stefon Diggs to the Buffalo Bills for draft picks. Both parties had been at odds with one another for more than a season with trade rumors swirling and Diggs being passive aggressive with his social media postings. That said, Diggs was the team’s leading receiver in 2019 and had posted back-to-back 1,000-yard seasons. Dalvin Cook had a huge 2019 but once again fell to injury late in the injury as he played just 14 regular season games. He finished with 1,135 yards rushing while adding another 519 yards receiving. At quarterback Kirk Cousins completed 69.1-percent of his passes but threw for just 3,603 yards with 26 touchdowns and six interceptions. There were issues early in the year with both Diggs and receiver Adam Thielen commenting on there early struggles of Cousins and the team’s lack of a passing attack. Thielen, for his own cause, appeared in 10 games due to a hamstring injury.

The 2020 outlook is uninspiring. The team signed Tajae Sharpe to add depth at receiver but seem like they will go into the year with Thielen and Bisi Johnson at receiver unless they add a playmaker in the draft. Dalvin Cook will again be asked to shoulder the load but with his injury history that will certainly put some questions on the table. The Vikings defense last season struggled and will be counted on to bounce back, especially in the secondary.

Vegas is favoring the UNDER on the win total of nine at -120. I think they could very easily be a 9-7 team here but Kirk Cousins isn’t a QB that is going to win you games and it seems like they have taken a step back on offense here with risk at running back. I’m out on the Vikings.

We saw a step back in year two of the Matt Nagy era in Chicago as the Bears finished 8-8 after winning the division with a 12-4 record in 2018. There was much hope for another division title as Chicago was backed by an elite defense and a QB in Mitch Trubisky that had put together a solid sophomore season. The Bears also drafted running back David Montgomery in the third round and may figured his ability to be a three-down back would be utilized by Nagy given how he used Kareem Hunt during his tenure in Kansas City. Unfortunately, nothing went right for the Bears in 2019 as the offense struggled mightily. Trubisky regressed and the offensive play calling was under much scrutiny. Receiver Allen Robinson had a big season, catching 98 passes for 1,147 yards and seven scores but there was little secondary threat opposite of him. The team’s defense remained strong, finishing fourth in points allowed and eighth in total yards allowed on the season.

It’s the Bears defense that has me intrigued at their +300 mark. I also like that they went and traded for Nick Foles to compete for the starting quarterback job with Trubisky. Injury forced Foles to have a lost season in Jacksonville last year but the Bears were willing to take on his contract to acquire him so it wouldn’t shock me to see him starting in Week 1. Chicago will need to get better on the offensive line after struggling last season but I feel as though Nagy is ready to reset and we saw last year that you can win in this league by having a game manager at QB, a strong running game and an elite defense. Give me the +300 on the division winner and the +100 on the OVER 8.5 wins.

Injuries really crashed the Lions 2019 season but, not many figured them to be big movers anyhow. The team is better than 3-12-1 when they have a healthy Matt Stafford and Kerryon Johnson but the defense again struggled and Matt Patricia has yet to find his footing as an NFL coach and if you believe the reports around the league it does not sound like people like playing hard for the guy either. If you want some highlights to 2019 for the Lions then Kenny Golladay is about all you got. He broke out for a career best 65 catches for 1,190 yards and 11 scores despite the fact that he had Jeff Driskel and David Blough throwing him the football for half the season.

Few teams were as active in free agency as the Lions were as they prepare for the 2020 season. The team traded away corner Darius Slay but signed Desmond Trufant to replace him. Patricia also signed two former Patriot players in Danny Shelton and Jamie Collins while trading for another in safety Duron Harmon. On the offensive side they brought in receiver Geronimo Allison and signed former Eagles offensive linemen Halapoulivaati Vaitai to a five-year deal.

With good health that Lions should certainly be better than the 2019 version that took the field. I think they could even hit the OVER on the 6.5 wins at +105 but at +900 to win the division, that is more of a dart throw.