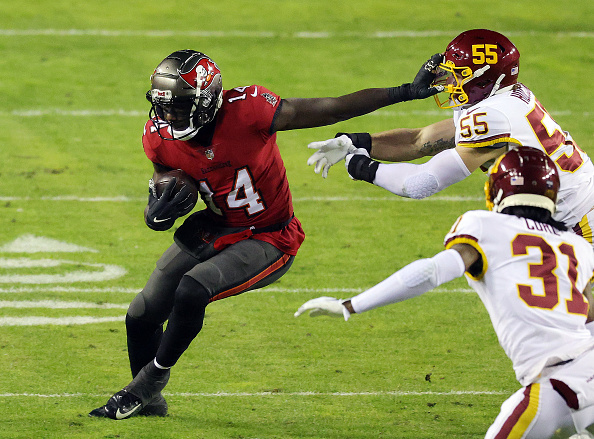 Published Sun Jan 17, 2021 10:57 am (EST)
Jon Impemba pores over the data, analysis and moneylines to bring you his best bets for today's games between the Browns/Chiefs and Buccaneers/Saints!
Jon Impemba | Wager Alarm | NFL

The is an interesting game here with the Browns pulling off the upset in impressive fashion last week against an obviously flawed Steelers team and now they go up against a Chiefs team who has an elite offense but also a defense that gives up points and does not stop the run which is something the Browns do very very well. The Browns defense is also far from elite, ranking 25th in total defense per DVOA. Ultimately I can see the Chiefs winning this one but I think plenty of points are scored before the clock hits zero here.

With Mike Evans going up against Marshon Lattimore in this game we look t o Godwin here to find the end zone today.  He has five touchdowns over the last four games which includes last week's playoff win over the Washington Football team. Godwin scored seven touchdowns in 12 games this season and when on the field is oftentimes the team's most targeted wide receiver. Getting nearly a 2x payoff on your bet today should he find the endzone.

The Browns are currently sitting at 9.5-point underdogs in today's matchup against the Chiefs. This is going to be a game where Cleveland tries to control the time of possession through their running game but ultimately they will need to rely on Baker here if they actually hope to keep pace with this high-powered Chiefs offense. Mayfield has passed for more than 259.5 yards in five of the last six games.

This one feels a bit too low to me. I realize over the last two games Hunt has only seen a total of two targets but he is a very good pass catcher and this is a game where the Browns are expected to be playing from behind for most of it. Prior to the last two games, Hunt had caught at least three passes in four straight and Vegas has the OVER on his yardage prop of 15.5 receiving yards set at -148 which is a pretty heavy favorite. If Vegas thinks it's pretty likely he goes for more than 15.5 receiving yards it feels like the over 2.5 receptions prop should be a likely outcome.