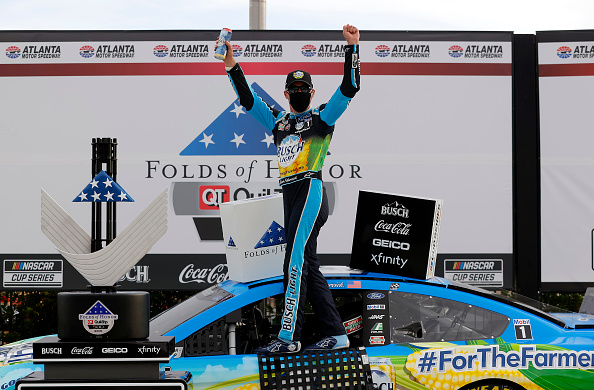 We’re arriving at Homestead-Miami Speedway a bit earlier in the season than we’re used to as this is typically the last race of the year and then heading into this year it was slated to be raced in March. The temperature difference on the track will allow for more close racing and slick moves as passes happen. This has long been considered one of the fairest tracks on the schedule as it’s a real driver’s track with multiple grooves of racing and ways to get around cars in front of them. Tire wear is a slight issue here much like we saw at Darlington and Auto Club earlier this year but not as much as what we saw at Atlanta last weekend.

Kyle Busch +450 - Busch is the defending race winner here, and just won the Truck series race here on Saturday evening. He’s yet to get a win the Cup series this year and thus, his win here last year is his last win in the top series. Busch is the slight odds-on favorite to win on Sunday and he’s got the track record and pedigree to back that up as well as the motivation to finally get into victory lane after seeing his teammate do the same on Wednesday.

Kevin Harvick/Martin Truex Jr. +500 - These two are grouped together as they both have very good histories here with Harvick having the better one overall with seven top-fives in the last eight races and each having at least three in the last four. Harvick won here back in 2014 and Truex won the 2017 edition of the race and was in position to win again in 2019 until a late-race pit stop ended that chance with a tire screw up. They ran 1-2 at Atlanta a week ago and both looked good at Darlington and Charlotte since coming back as well. Truex won on Wednesday and has a bit more momentum but Harvick has two wins this year to Truex’s one.

Joey Logano +900 - Logano won his Cup title here back in 2018 and in much of his career he’s had solid runs here with several top-fives in the last eight races. Logano is starting P2 on Sunday which puts him in position very early to lead laps and stay up front. He’s also got a couple of wins this season already, one coming at a mile and a half, but hasn’t finished in victory lane since the season restarted. Logano has the best payout amongst the favorites as well.

Ryan Blaney +1200 - Blaney has four top-five finishes in the last five races this season including a runner-up on Wednesday in Martinsville. He was running second at Auto Club and had a quick car at Darlington earlier this year. He ia still looking for his first win this season to catch up with his teammates who each have multiple. Blaney will start P11 on Sunday but that’s still close enough to move up and compete for a win, though he’ll have to shed a disappointing history here recently to do that.

Jimmie Johnson +1800 - Johnson has won seven Cup Series titles at this track and because of that they are naming a part of the track for him this weekend. He’s also been really fast at intermediate tracks this season as we’ve seen him run up front at Darlington and Atlanta and led 70 laps on Wednesday at Martinsville after starting P21. He will start P9 on Sunday and if the speed continues to show up at a track he’s done well at before, plus add in the extra motivation of having part of the track named for him in the final race he’ll likely run here, and he’s got a good shot to be a contender late.

Tyler Reddick +1800 - Reddick won two Xfinity titles here the last two years and his driving style is tailor-made for this track. He loves to drive up along the wall and that’s undeniably the fastest way around this circuit. He is starting P24 on Sunday but a couple of years ago, Kyle Larson started there and finished P2, and Reddick is a lot like Larson in terms of driving style.

Austin Dillon +8800 - Dillon has had three top-11 finishes in his last four races overall this season and is a brand new, first-time Dad. He’s been strong here in the last four races with an average finish of 10.5 and moving up several spots a race and now the extra momentum from this season and the exhilaration of being a new dad could jolt him up to being a threat for the win late in the race.