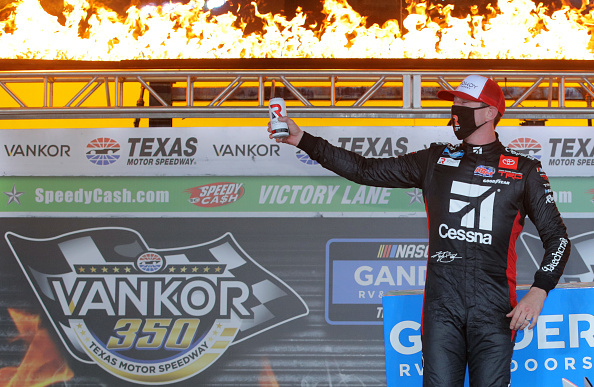 No Limits Texas hosts the race this week and follows the Xfinity and Truck double-header that happened on Saturday. Texas is a quad-oval 1.5-mile track with banking that differs from Turns 1 and 2 to Turns 3 and 4 and is generally considered the fastest intermediate track on the Cup circuit.

This is a track where winners have come from further back than typical intermediate tracks but the odds still favor starting high in the grid to have a better chance of winning with more than 57-percent of winners coming from the top-five starting spots and 79-percent from the top-10 in the grid.

Kevin Harvick +275 - Harvick has won here three of the last five times the Cup drivers have raced in Fort Worth. He has dominated since the restart as well with four wins in that time and it could’ve been five at Kentucky last weekend had he not been bumped on the final restart. Harvick loves racing here and has a car that has been ready to race every weekend and he even finished P3 in the All-Star race on Wednesday after starting P10 in last 15-lap sprint.

Kyle Busch +500 - Busch has been great at Texas in his career and this weekend as well as he “won” the Xfinity race, before being DQ’d for a failed post-race tech inspection, and then won the Truck race later on Saturday as well. He’s been a vocal opponent of the no-practice guidelines that are in place right now but, he did race twice on this track on Saturday and clearly did well. The last time he started P4 at a 1.5-mile track he finished P2 at Atlanta (a similar track) and he could be in a great spot to move up one more spot from that showing on Sunday.

Denny Hamlin +600 - Hamlin won here last year in March and aside from last weekend has been one of the top-two cars on the track each week since May. Hamlin has been a bit up-and-down here though with that win being his only top-10 in the last four early season races which means these odds are mostly from his season-long success rather than his history at the track.

Ryan Blaney +800 - Blaney is starting second on Sunday and has a great history at 1.5-mile tracks this year with the last several races at them showing him with an average finish of better than 4.0. He’s been showing the elite speed the last several weeks and a few races ago had a run of four-straight top-four finishes. Starting up front has also been good for Blaney as he’s been able to hold those spots fairly well this year.

Aric Almirola +1200 - Almirola is fresh off a streak of top-five finishes that ended last week at Kentucky but he’s on the pole this week. Typically starting that close to the front is good news for the driver starting there but that’s under the assumption that they qualified for that spot and weren’t put there in a random draw. Almirola has been very quick of late and should be able to run up front for a good portion of the race, but he’ll need help to win the race and some good pit strategy.

Jimmie Johnson +2200 - Johnson has won a ton at Texas and has the most wins here of any driver in the field including one of his last wins before the winless streak began. He’s shown speed in the last few races including running up front late at Kentucky before getting spun on a late-race restart. If Johnson can have the speed show up and put together a full race, he could be a factor late at Texas.

Erik Jones +2800 - Jones has run at Texas six times in the Cup series and in five of those he’s finished in the top-10 including three P4 finishes. Jones loves Texas and though he’s starting in the mid-20s, he’s shown the ability to make moves to move up through the field and with the speed he’s carried of late that shouldn’t be an issue again on Sunday in Fort Worth.

Tyler Reddick +8000 - Reddick loves the high-line and makes speed that way and Texas is a track that you can do well using that line. Kyle Larson made use of that same line to nab a few top-fives here and Reddick has been arguably the most consistent rookie and starting just outside the top-20 is a familiar spot for him and one that he has moved up well from in the last few 1.5-mile tracks.

These games may change from the time this is published.