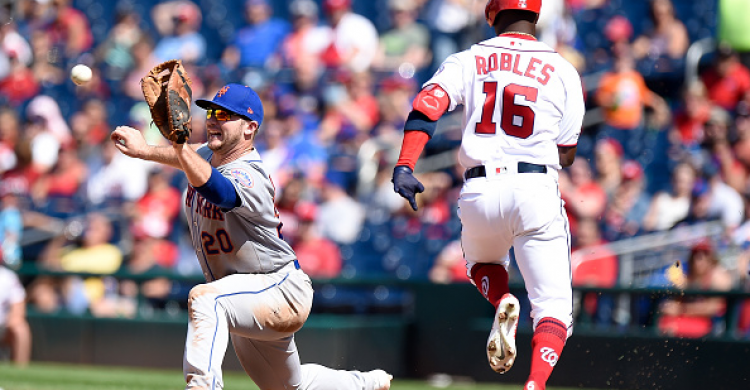 The three nightcap games woke up the rest of the MLB day’s offense with one team covering the over themselves including the Dodgers, Indians, and Diamondbacks. The Dodgers scored 15 on seven home runs that also saw the Rockies hit four homers. Labor Day saw the early slate dominated by the away teams with the Mets and Rangers winning as underdogs and the Twins squeaking out a 4-3 win over Detroit after finally getting to the Tigers’ bullpen.

Tuesday sees 16 games including a doubleheader between the Orioles and Rays (can only imagine the attendance for this set) and has some studs on the mound in D.C.

Two Cy Young candidates take the mound in D.C. with Jacob DeGrom matching up with Max Scherzer as both teams continue to battle for a wild card spot. The Mets took game 1 behind Noah Syndergaard’s strong performance, but the Nats look to rebound with Scherzer’s second start off the IL. Both teams have terrible BvP numbers with each team batting sub .200 and around .600 OPS. DeGrom has gone seven innings in 8-of-10 starts since June, giving up more than two runs just once, his last start. Max continues to be stretched out after going just 4.1 innings against the Orioles so we’re not looking past the fifth here. With plus money on the board and these bullpens awaiting the later innings, taking the first five is the optimal move with two studs on the mound.

Oakland returns home after dropping 2-of-3 in New York, even though they were never trailing in the top half of an inning. Two walk-offs later, and Oakland loses the series, but still remains in the lead for the wild card. They get the Angels and Jaime Barria, who has some surprising numbers against the A’s. Current Oakland hitters are 4-for-39 against him with 13 strikeouts. Mike Fiers and his career year continued in Kansas City with a 5.1 inning one-run display last week, getting him to 13-3 on the season. He’s been terrific at home with an 8-2 record and .219 average against right-handed hitters, something that Los Angeles will continue to tack at the top of their lineup with the bottom of it struggling mightily.

Dylan Cease is not good at his job. Multiple home runs given up in multiple games this year and goes on the road to face Cleveland. They seemed to finally get on track after the loss of Jose Ramirez with an 11-run drubbing of Chicago on Monday. Look for them to continue after a small slump in Tampa.

Porcello returns home and has good numbers against the Twins while Minnesota goes with a guy in Randy Dobnak who was in High-A earlier this year! After traveling from Detroit and the Red Sox coming back from a long west-coast road trip, expect the bats to be sleepy. If you’ve never seen this bet before, this is a very high number. You really need a high scoring affair with both offenses clicking to get over this total so we look to find the under.