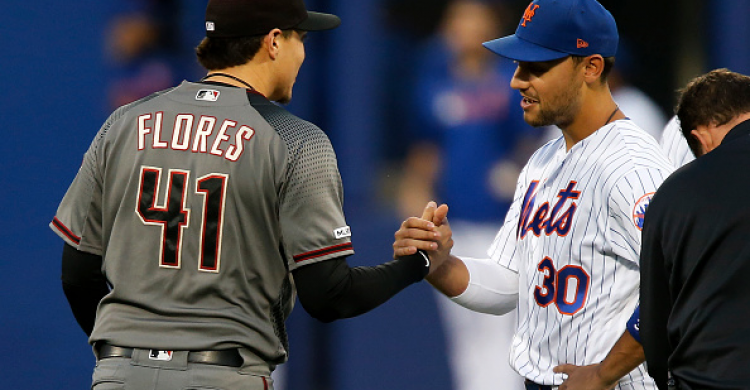 A light night of baseball with eight games on the Monday docket, while the NFL had a doubleheader, saw Jacob DeGrom with seven strong innings and Peter Alonso’s now league-leading 46th and 47th home runs take the Mets over the Dbacks in a big wild card matchup. The Astros hung a 15-spot on Mike Fiers and the Athletics as they kept pace with the Yankees for home field in the AL after their 5-0 win over the Red Sox, effectively ending their season. The Cubs were able to win on the road behind Kyle Hendricks and kept their two-game lead over the Brewers who knocked off the Pirates.

The NL still has six teams within four games of each other fighting for the two Wild Card spots while the AL is now down to a three-team race with the Rays, A’s, and Indians. A full run of games on Tuesday so let’s dig into some angles worth checking out.

Michael Wacha gets the Rockies Team that he gave up three runs on six hits in 4.2 innings two weeks ago; however, it’s in Coors. He’s been bad on the road this year with a 5.40 ERA in 11 starts and has worse splits against, but you have to play the numbers here. You’re getting 8 runs to work with and just 30 outs, four of which usually include the pitcher. This number is high in comparison to the full game of 13.5 runs, but with the Cardinals bullpen, you can see the books are putting emphasis on the starters.

DeGrom’s strong start got the Mets going again and I expect that to continue. Wheeler goes against Zac Gallen, who is outpitching is peripherals.  Gallen has a 3.56 barrel FIP, over a run higher than his actual ERA, and one of the highest discrepancies going on this run of games. Wheeler is actually due to regress to his barrel FIP and we’re getting close to an even money game for pitchers facing revere fortunes. Gallen is coming off his one-hit performance against the Padres, but goes on the road, a place he has fared worse than in Arizona. He’s given up nine hits in Colorado and six hits in Milwaukee in just nine innings of work. Wheeler owns some fairly good splits against Arizona with hitters at .241 and a .680 OPS.

Zach Plesac and Jose Suarez both own barrel FIPs over 5.20, at a rate over 6% while the teams they are facing can score, but there’s one problem: Mike Trout ain’t in either lineup tonight. That means the Indians take the advantage here and look to continue their season-long dominance, where they have won the first four of the six-game set. Suarez has yet to finish six innings in his last ten games, a stretch in which the Angels are 2-8 as a team.

There isn’t a number for this yet but does it matter would be the real question. It’s Edwin Jackson night. Play it.

Yelich has a hit in 8 of his last ten games including three doubles and three home runs. He’s hitting .357 in September after a “dip” in August from .306. He faces Elieser Hernandez who has given up at least one home run in four of his last five starts and at least six hits in three of those.