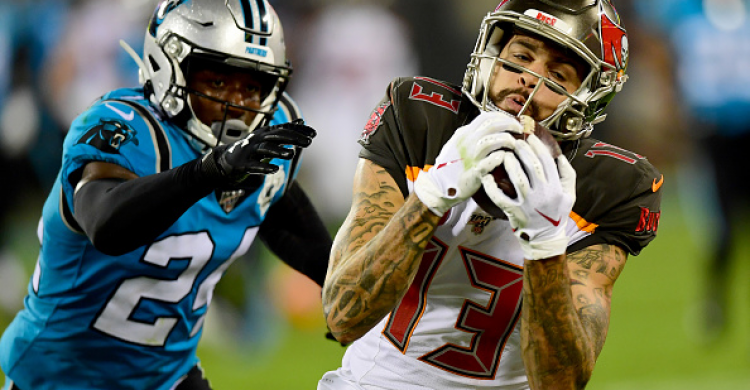 The Week 3 inactives and late team news are filtering in as the deadline approaches for finalized rosters as we continue after a terrific 3-0 record in week 2. With more results out there, we’ve got more data to work with and come up with props to lay money on.

Dak’s total fell short by a half yard, Kelce was 100+ and the special Philly/Atlanta prop cashed with ease after a crazy fourth quarter. Props are always fun to dive into, but always to be careful going crazy on because you’re usually relying on matchups and healthy players. If either of those changes, your bet could come in danger so it’s always better to diversify the “portfolio” with props; thus, you’ll only see one or two a game from my side.

This is a gift from the books. Evans has 13 targets from Jameis Winston this year, good for just six catches, but the remedy comes today in the form of the New York Giants. Last time I checked, Daniel Jones isn’t playing corner back. Cole Beasley, Mike Gallup, and Amari Cooper have already gone over this mark thus far this year against the Giants. With an extra few days off their week 2 win over the Panthers, expect Evans to really get a bump against this bad defensive secondary.

Bell is getting dealt a very bad hand with two QBs out and now going against the league’s best defense so far this season. If there’s one thing that everyone knows Bill Belicheck and his team’s do well, that’s take a way the opposing team’s best option. You feel like the Pats are going to make Luke Falk beat them, which means the rushing option will most likely be out of the question. With a potential blowout available, you could see Bell’s time being limited as well. All signs point to the under for his total yardage. When it comes to RB’s, I always tend to get their total yards for props, because one big play can really swing a number.

Philly is decimated with injuries right now so scoring in the red zone without DeSean Jackson, Alshon Jeffrey, and Dallas Goedart makes life difficult. Detroit was bottom third of the NFL in red zone scoring last year, but gets help with injuries on the Eagles’ defense. I expect movement of the ball just enough that these teams are able to get into field goal territory. With clear weather and low wind, we’re looking at optimal field goal kicking environments outside of the dome.