Rob Trayah is here to bring you his Best Bets for Week 8 of the NFL season! 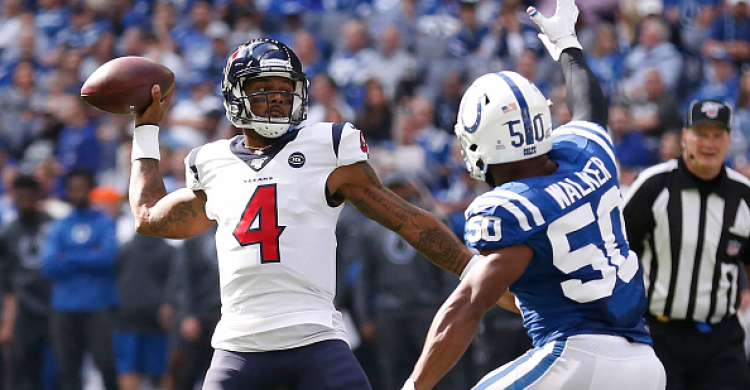 The overs don’t get there with a very low key second half in New York followed by Atlanta losing Matt Ryan, but the Jaguars pull away in the second half to salvage a win for us. Quarterbacks keep going down and the league continues to suffer from it. With the likes of Matt Schaub, Mason Rudolph, and Matt Moore coming into relief duty on potential winning teams, the talent pool at quarterback might be the shallowest it has been in awhile and we’re only through week 7!

We head back to London again this week with the BENGALS and Rams after a dismal Vikings/Redskins Thursday night game. England getting a stellar Cincinnati team that has been outgained by at least 110 yards in six straight games while the Rams seem to found their footing with a blowout win over the Falcons.

Oakland Raiders vs. Houston Texans – Over 51.5

Betting against Oakland in this article hasn’t been profitable for us so we’re taking the over as Oakland finishes its fifth road game in a road in Houston. After letting Aaron Rodgers go buck wild in Green Bay, it only made sense that they would trade their best corner, which isn’t saying anything, to the team they are playing this week.

This will be the first week that Oakland will have their starting offensive line against a bottom of the league passing defense. Ranking 29th in passing yardage allowed and seven yards per pass, the Texans can’t get to the quarterback either. With the Raiders scoring 24 points in three straight games, they should be able to hold their own on the turf.

Houston should do their own damage through the air against an Oakland defense that also can’t get to the quarterback, and also is allowing almost 290 yards in the air. You’ll know early if points are in this game with how fast Oakland usually starts games.

Kyler Murray gets his first crack at the Saints and their home doldrums of the Superdome after their third straight-up win, making the Cards 5-2 ATS on the season. Here’s the one problem that Kyler has: he hasn’t faced a good defense. Of the seven games, the best defense seen was Carolina, which ranks 12th in yards allowed. To add on, they lost.

The Saints didn’t skip a beat or lose one beat or game with Teddy Bridgewater stepping in for Drew Brees and their defense has been outstanding. New Orleans is now seventh in total yards allowed and 11th in scoring. Brees seems on track to play this week, but it shouldn’t matter. The Cardinals defense has improved a bit with Patrick Patterson’s return, but with Alvin Kamara playing, the Saints should be able to distance themselves early.

Both teams enter this game struggling to score and the Jets look like they are about to call it a year. With reports that Robby Anderson might be traded, Ryan Kalil limited, and now Jamison Crowder on the injury report, the offense is limited. Sam Darnold, if you don’t recall Monday night, had NO IDEA what was going on against an actual football team, and Jacksonville has a defense, even without Jalen Ramsey.

Marcell Dareus being put on IR will hurt, but expect Jacksonville to continue running the ball. Since going to this model, Gardner Minshew has turned into a game manager and relied on Leonard Fournette and their offensive line that is averaging 5.1 yards per rush. The clock will run as the Jets won’t be able to get the Jags off the field and the total won’t be threatened with both teams ranked in the bottom third in touchdowns per game (27th and 31st) respectively.