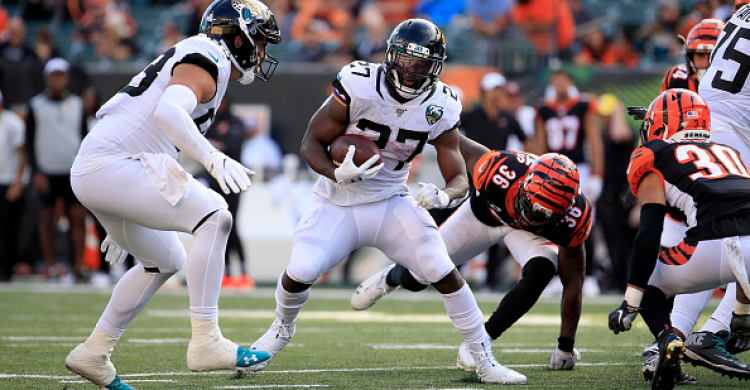 A very nice 3-1 week for us last week, perfect if you didn’t go with the Fun One, which is a whole other story with the teams combining for seven touchdowns in the first half. Alas, the others were rocking chair winners and a nice little take away from the prop scene.

We dive into the full schedule in Week 8 with a London game on tap, the return of Matt Schaub and Drew Brees, and the ascent of Ryan Tannehill. Adam Schefter has turned into the new active/inactive list guardian, releasing the direction teams are taking with players earlier than the 11:30am deadline so we have some news already out, creating options for winners.

There’s a good chance that Fournette gets the ball a million times today against the Jets, who give up 3.3 yards per carry, good for second in the league. The defense comes to play on the road; however, they are still without C.J. Mosley and now will be without his backup, Neville Hewitt meaning that fifth-round pick Blake Cashman is their most veteran defender. The defensive line has always been the stalwart for the Jets up to task against the Jags front, who is gaining over 5.1 yards per carry.

After a Week 3 bump in touches, Fournette has gotten the ball at least 20 times in four straight games, including 29 times last week, good for 131 yards. If he reaches the second level, Fournette can get the long game going, with long runs this year including 48, 69, and 81 yards. Expect at least one to get going and easily get this over the total.

Jones has struggled after his win at Tampa Bay in Week 3, there is no denying that. He has thrown a pick in four straight games, and hasn’t had a QBR above 65 in that stretch. Yet, we’re leaning towards the over here because he gets the vaunted Detroit Lions’ defense, who continue to give up yards and now have traded away a corner in Quandre Diggs. They’ve already given up over 259 yards in every game this season and that includes the last three weeks of 315, 283, and 338. Expect Jones to see a bunch of short passes with Saquon and Evan Engram full strength, but he should have enough attempts with the Giants’ defense being equally bad.

Lewis has continued to see his role reduced with Derrick Henry controlling a season high 75% of the snaps last week against the Chargers. With another home game and Ryan Tannehill leading the charge, a heavily run-based game is in line here. The Buccaneers have done a great job against receiving running backs, allowing an average of 4.67 catches a game and 34 yards, which includes two games against Christian McCaffrey, a game against Todd Gurley, Alvin Kamara, and Saquon Barkley. With Tampa off a bye, Lewis isn’t the primary target anymore with Marcus Mariota’s passing game on the bench. Expect Tannehill to use his weapons downfield more often and keep Lewis in the dark.

We’re not having fun this week, we’re getting money. We will return next week!