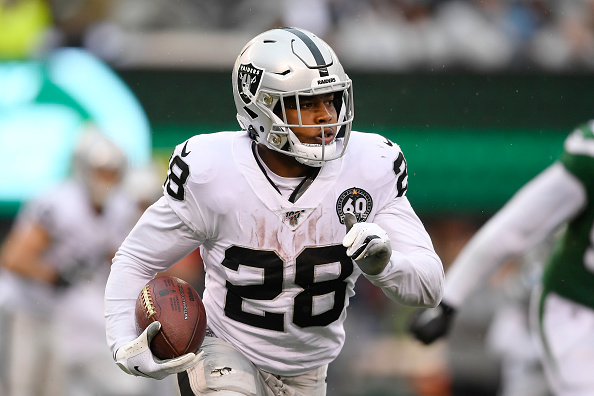 Rob Trayah brings you his Best Bet Prop Picks for Week 13 of the NFL season!

Week 12 wasn’t as glamorous as we needed it to be with a 1-2 week and a miss on the big prop. Mike Evans wasn’t the recipient of the Falcons poor secondary, that honor fell to Chris Godwin. Joe Mixon had 15 yards on his first 8 carries and then 64 on his next ten to push his prop over, most of that damage coming in the fourth against a prevent defense. Ryan Fitzpatrick, however, covered the 1.5 touchdowns and got us back an extra half unit.

Week 13 is a troublemaker with all the weather concerns. We’ll try to limit our exposure to the outdoor games, but some numbers are too hard to pass up.

Over 77.5 rushing yards – Josh Jacobs vs. the Chiefs

Jacobs had his worst week of the season against the Jets in Week 12, and it really shouldn’t be surprising. The Jets are one of the best rush defenses in the league and the Raiders were out of the game early, meaning passing would be needed. In their week 2 meeting against Kansas City, Jacobs went 12 for 99 including a long of 51 yards. He’s not a threat out of the backfield to be a pass catcher, but that should not scare folks off this.

The Chiefs can’t stop the run. This is a stone-cold fact. Teams are averaging 5.1 yards a carry against the defense, an average of 122 yards a game on the ground, and get run over by good running backs that don’t split time. Check, check, check. To keep the Chiefs off the field, Jacobs should see action early and often, even more so with high winds in the forecast.

Under 199.5 Passing Yards – Duck Hodges vs. the Browns

The Steelers will be without JuJu Smith-Schuster and James Conner again meaning the defense is going to need to be the catalyst for a win here. Benny Snell will be active and should be the lead back with Jaylen Samuels helping out the attack. That means Mr. Hodges has Diontae Johnson, James Washington, Tevin Jones, and Johnny Holton as his wideouts. Who is that scaring?

Last week we said that you should play against the Browns passing defense with no pass rush and this week, we’re saying play with it. Hodges gets his second career start after being named to that position over Mason Rudolph this week because “he’s not killing us”. All I hear is conservative game plan, run the ball, and grind out a win. It took 44 attempts by Rudolph two weeks ago to get to 221 yards, but the Steelers ran the ball just 16 times. Expect that number to be much higher (36 in Hodges’ first start) and a heavy reliance on the defense.

Andy Dalton returns and what kind of action does Boyd see with his former pal? Games of ten, 14 and 14 targets, good for 25 receptions. The Jets have been stingy against the pass, but that doesn’t mean they don’t give up receptions. They give up an average of 14 receptions a game and with no A.J. Green still, the red rifle should have his sights on Boyd all day.

Kupp struggled against the Ravens (who didn’t) and has nine catches in three games off the bye week. The Cards have given up a touchdown to wide receivers 12 times this year in 11 games and with Patrick Peterson healthy again, he should match up against Robert Woods or Brandin Cooks. Goff needs to find the guys who got him success and Kupp is that #1 option.