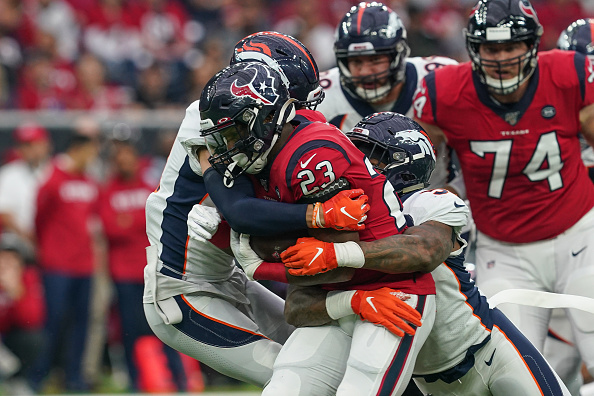 Rob Trayah brings you his top prob bets for Week 15 of the NFL season!

The easiest week we’ve had, going 3-0 with the two overs clinched by half time and Ryan Ftizpatrick’s under getting there by him using his feet more often. Can’t beat clean sweep weeks, especially this late in the season with teams fighting for playoff seeding or fighting to get the best tee-time on the golf course.

Week 15 has its opportunities with no real standout matchups, but plenty of quality battles. The Texans and Titans battle for the AFC South lead, the Bills and Steelers vie for the five and six seeds in the AFC, and the Rams head to Dallas to face the embattled Cowboys in a major playoff implication game. Here’s some looks you should take a peek at while earning some cash on your couch.

Hyde has arguably had his best season as a pro this year, only 74 yards away from his first thousand-yard season, averaging 4.7 yards per carry. He, however, gets a stout rushing defense in the Titans on the road in Tennessee. When Hyde has faced a tough rushing attack, he doesn’t do well. 19 yards against the Chargers, 35 against the Colts, 17 yards against the Patriots, all matchups that involve teams in the top 15.

The Titans will be the best rushing defense they face at 4.0 yards per carry and 3.9 at home. They have allowed just one individual 100-yard game this season (Christian McCaffrey) and have allowed under 4 yards a carry in three of their last four games. If rushing yards are going to happen in this game, expect Deshaun Watson (O/U 24.5) to be the recipient as attacking Tennessee through the air is the way to beat their defense.

Over 6.5 Receptions – Christian McCaffrey vs. the Seahawks

With the firing of Ron Rivera, the Panthers elevated their offensive staff to run the team with the Turners running most of the production. McCaffrey has been a major bright spot for the Panthers this season, dominating games and having an outrageous usage rate, which includes having 38 receptions in his last four games. When the Panthers get behind, thy rely on him heavily in the passing game.

The Seahawks allow 25 completions a game, third worst in the NFL and that goes up to 26 on the road. They allowed nine receptions to Vikings backs two weeks ago and seven to the 49ers while Devonta Freeman had eight himself (Devonta Freeman!). The yardage might not be there, but the receptions will be.

Over 5.5 Receptions- Zach Ertz vs. Washington

Exclude a bad week 13 in Miami for Ertz, and he’s had nine or more receptions in four of five games including at minimum 11 targets. This number seems incredibly low for Ertz considering Greg Ward is going to be the wide receiver with the most targets. Greg. Ward. If Carson Wentz isn’t throwing to his tight ends on every passing play, then what are they even doing?

Injuries have ravaged the Eagles and they need to lean on their playmaker in a game against a bad team. This is all about pure volume; in games against Washington this year, they’ve only allowed double-digit targets in two games which includes week one against the Eagles. They’re 29th in opponent completion rate at 68.72%, a sight that Wentz should be salivating at with Jordan Howard out and a group of replacements in his wide out core.