This week's In-and-Ups section looks at players off an injury, cold weather, and some position plays. Rob Trayah looks to help load up your wallet in Week 14. 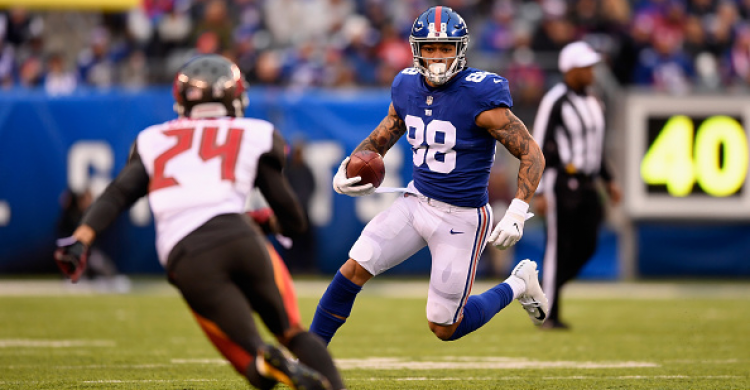 This week's In-and-Up looks at Week 14 matchups with cold weather abound, players coming back from injury, and some guys looking to profit from some good matchups.

Evan Engram Under 40.5 Receiving Yards - Fresh off a hamstring injury, Engram is on a snap count. He was starting to only feature in passing situations anyways, but this total seems too high. Redskins have only given up over 41+ yards twice since week 7 and the snap count should play a factor here. Expect Barkley to see more in the passing game, if that's even possible.

James White Over 5.5 Receptions - White has hit this prop in 4-of-6 games, and coincidentally, it was all in wins. Miami has a good pass rush that always seems to trouble New England in Miami so look for dump-offs to White early and often. He also had eight receptions in their first matchup this season.

Sam Darnold Under 18.5 Completions - Cold weather return for Darnold and against a good Bills defense. Buffalo has not allowed over 17 completions in their last 7-of-8 games and the only time that did happen, was to Tom Brady. Jets' receiving core isn't good enough to help the rookie out here.

Tre-Quan Smith Over 40.5 Receiving Yards - Smith has been quiet as of late, but his snap count is still high. Tampa Bay's defense is still awful against the pass and Smith's possession style has been under utilized as of late including last weeks no receptions. It's not surprising the team lost and look for Smith to get more looks this week with Brandon Marshall still inactive.