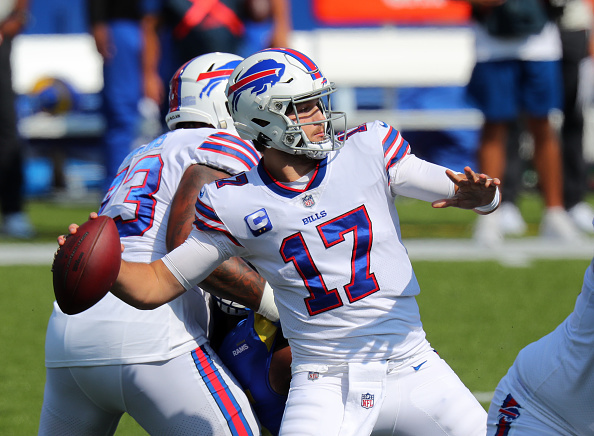 #FANation the FREE TO PLAY #NFL Week 4 Pick'em is live!

Join today for your chance to win up to $200 in prizes! http://fantasyalarm.com/picks

Want to WIN even more?

When you sign up here http://fantasyalarm.com/playmonkey with @MKF make a deposit and earn 5x the prizes up to $1,000!

Welcome back to the second edition of the Fantasy Alarm Monkey Knife Fight Props article! Hopefully, you guys were able to jump on the props in my first article, as we went 2-2 on the day, but we hit a 3x return and an 8x return on our long-shot prop to make some very nice profit! This week looks to be the same, as there are a few props I have already locked in and think you should as well! Let’s get to it!

I am not going to lie, I think this is likely my favorite prop on the whole slate. Both of these numbers seem not “too easy” to attain, but they seem like softer numbers than I would have expected. First, I understand that the Raiders have been pretty good against opposing QBs through the air so far to start the season, but they haven’t played a guy like Josh Allen yet. However, they have played Teddy Bridgewater (269 Pass Yards), Drew “Dust” Brees (312 Pass Yards), and Cam Newton (162 Pass Yards). Not a single one of those quarterbacks has come close to what Josh Allen has been able to do so far this season. Allen has put up 311, 415, and 312 passing yards in his first three games. If this Raiders defense allowed those types of passing yards to Bridgewater and Brees, I have no reason at ALL to believe the Allen won’t throw for 300 plus. Even in a game where Allen carried the ball 14 times (NYJ Week 1), he still threw the ball 46 times! He has attempted at least 33 or more passing attempts (114 total attempts) in all three games so far this season and has ONLY attempted eight carries in his last two games. Seems like he is trusting his arm to do the work? Seems so. Now, onto Carr….

Carr’s passing yard prop line here is pretty interesting. This game has a total of 52.5 points, so the books plan on points being scored. Carr just threw for 261 against the Patriots, on the road in Gilette stadium. In his only home game so far this season against the Saints, he threw for 284 yards. First off, the Bills run game has been really good, as they have allowed the 4th fewest rushing attempts (more passing scripts), and the eight lowest rushing yardage total so far over the first three games. Now, their passing defense? The Bills pass defense has allowed the ninth most pass attempts, the ninth most completions allowed, the sixth most passing yards allowed, as well as the sixth most 20+ yard passing completions (13 total). The Raiders up to this most are completing the 12th most pass attempts, have the third-best pass completion%, have the 12th highest yards/attempt, and the tenth most passing TDs. The best part? Carr hasn’t thrown an interception. Why? Because Carr is what you would call a “play the odds” type QB, as he doesn’t make too many reaches for passing attempts. He dumps short balls and hits medium routes well, and as you can see, he has been pretty money on passes over 20+ yards. I think both of these QBs get over these numbers quite easily.

Some may be looking at this and saying Foles under 15.5 fantasy points after he just put up 18-ish fantasy points in a half against the Falcons after taking over for Money-Makin’ Mitch? Don’t drink that juice, fam. This Colts defense is actually pretty damn salty. Not only did they hold both Sam Darnold and Kirk Cousins to under 10 fantasy points (we will give Mustache Minshew a pass here, as he just had a hell of a game against them in Week 1), but the Colts defense is holding opposing quarterbacks to the LOWEST average fantasy points (10.1) outputs so far on the season. It doesn’t end there. The Colts passing defense has also allowed the 5th fewest average fantasy points (23.6) to WRs, and also the fewest average fantasy points (2.1) to TEs, also. It still isn’t over with. The Colts passing defense has allowed the fewest pass attempts (75 total), the fewest pass completions (47 total), the second-lowest yards per attempt mark (6.1), AND the lowest total passing yards (396) allowed in the league so far. Not to mention, they have the most interceptions of any defense in the league as well at six on the season. This will not be a walk in the park for Nick Foles first start of the season in lieu of Mitchell Trubisky.

Moving on to Position one with Taylor. IT seems like a decently big number seeing as how Taylor has only eclipsed this number once so far in his first three games, right? Let’s don’t forget the vulture Hines stealing a couple of TDs in Week one, but since then, over the last two weeks, JT has seen 39 total rushing attempts for 160 rushing yards, and two rushing touchdowns. The Bears defense has allowed on average to opposing running backs 23.5 fantasy points so far on the season, this included a 14-80-1 line to the bone sculpture of Todd Gurley’s knee caps and a 14-93-0 line to the 35-year old legend Adrian Peterson. Peterson ran for a 6.6 YPC! The Bears run defense is allowing the eight highest YPC average over their first three games at 5.0 YPC, and they are also tied for 6th in most rushing touchdowns allowed so far at four. The biggest factor here? They haven’t faced a young, talented back like Taylor yet so far this season, and I think the Colts will deploy him nicely in this one.

Position two seems like another easy one. James Robinson has been the talk of the town, world, nation, after his 30-fantasy point effort last week against the Dolphins where he rushed just 11 times for 46 total yards and two rushing touchdowns. It wasn’t so much that, it was the fact that he was also heavily involved in the passing game with six targets on the night for 83 receiving yards as well. Robinson seems to keep getting better as the weeks go by, put up 10 fantasy points in Week One, then 24 in Week 2, and then almost 31 in Week 3. What can we say for Mixon? Not exactly close to the same, right? Mixon hasn’t eclipsed 13 fantasy points in any game yet this season, he is not involved much in the passing game at the moment, and he’s averaging around 17 totes for 60-ish yards a game. The Jags defense has allowed mid-pack averages of fantasy points to the RB spot at 23.6, they have also allowed the 8th lowest number of rushing attempts, tied for 7th lowest rushing yards per carry at 3.8, and have only allowed three rushing touchdowns on the season as well. The Bengals run defense, you ask? Well, let’s go ahead and open that huge can of worms here for Mr. James Robinson. Bengals defense has allowed the fifth-most fantasy points to opposing backs at an average of 28.3, they have allowed the most rushing attempts to opposing backs at 110, the second-most rushing yards allowed at 545, the seventh-most rushing yards per carry at 5.0, AND tied for the fourth-most rushing touchdowns at five allowed so far. They have also allowed FIVE runs of 20+ yards so far on the season, only the Texans have allowed more at six. I think you can likely try to find any rushing props you can for James Robinson in this matchup, and you don’t have to worry about any competition here either, as Robinson is the guy in Jacksonville for the foreseeable future.

I wanted to stay in this game for many of the reasons I listed above in Prop 3. Just going to bank on the research I provided and mostly because I think there is a slight edge here in these fantasy point prop-lines provided. Once again, I wouldn’t place more than 0.5x your usual best size on this, and in most instances,  I would stick to around 0.25x your typical bet size, like this, it is called a “long-shot” prop for a reason. I am not going to re-run over every statistical measure I alluded to in Prop three, so if you need to re-read that analysis for reasoning here, go for it!