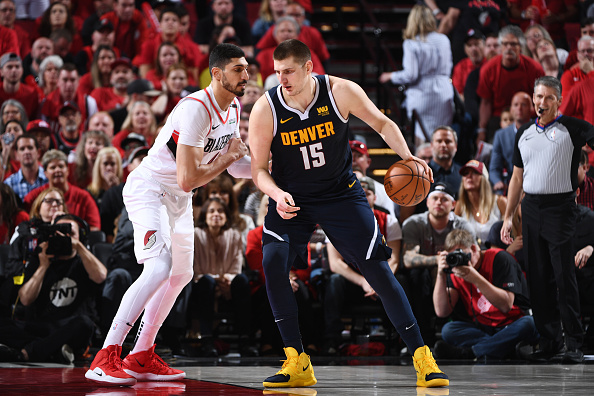 The NBA Playoffs are rolling along and if you haven’t already, it’s time to take advantage of the betting trends, props and lines as the Eastern and Western Conference semifinal series continue on.

The Philadelphia 76ers and Toronto Raptors are tied 2-2 heading into Tuesday night’s Game 5 - tipping at 8 pm ET at the Raptors’ home arena. Toronto is currently 6.5-point favorites with an over/under set at 211.5 total points.

Meanwhile, the Portland Trail Blazers and Denver Nuggets are also tied 2-2 ahead of tonight’s Game 5, which tips at 10:30 pm ET in Colorado. The Nuggets are currently 4.5-point favorites with an over/under of 213.5 points.

Let’s now take a look at which bets stand out ahead of tonight’s action!

This is one trend that’s impossible to ignore. Through the first four games of this series, the under has cashed all four times as the games have averaged just 199 total points compared to an average O/U of 219. Furthermore, the unders have gone 8-1 in Raptors games these playoffs and 7-2 in Sixers games this postseason.

Now for a quick history lesson. Since 2005, Games 5-7 of a playoff series have gone under the total at a 54.4% rate. During that span, this is just the 22nd time that the two teams in question went under the totals in each of the first four games. The following Game 5 of those series stayed under 13 times or at a 61.9% rate.

Looking past all those numbers, this 211.5 total just seems way too high considering the lower-scoring contests we’ve seen through the first four games of this series. Both the Raptors and 76ers aren’t known for playing fast and each squad would rather use up most of the shot clock to set up the best possible shots.

The Nuggets are rightfully favored tonight (-4.5) heading back home for a pivotal Game 5 - and the money line bet on a Denver win seems like the right play.

Denver won the series-opener (at home) by eight points, dropped two straight, then beat the Blazers by four points on the road in Game 4. In that Game 3 loss that took four overtimes, Denver came seconds away from pulling out the road win in multiple overtime periods. Although they lost that one, coach Mike Malone’s squad has looked like the better team since - and the win in the last game showed that. Now, the Nuggets will play in the comfort of their home arena - where they were 38-9 during the regular season and playoffs.

Nikola Jokic is the star for Denver, but it’s been the contribution from other players that has carried them in this series. Jamal Murray has scored 34 points in back-to-back outings in Games 3 and 4 and his pick-and-roll connection with Jokic is one of the best in the league. Paul Millsap has become more involved offensively and he’s put up double-doubles in three straight games while averaging 17.3 points in this series. Will Barton exploded for 22 points in Game 3 and is a key piece on Denver’s second-unit. Then you have Gary Harris who is playing great defense on Damian Lillard and CJ McCollum and providing enough scoring when called upon.

The 4.5-point line is a little much to take Denver on, so take the safe route with the money line and root for the Nuggets to take a 3-2 series lead.

Denver’s big man was a triple-double machine during the regular season and he’s carried that do-everything role right into the playoffs.

During the first-round series win over San Antonio, Jokic averaged 23.1 points, 12.1 rebounds and 9.1 assists across the seven games. Through the first four games of this series vs. Portland, his averages have increased slightly - putting up 26.8 points, 13.3 rebounds and 9.5 assists.

As for the 51 total points+rebounds+assists, Jokic has hit that number twice in the four games (52 total in Game 1, 65 in Game 3) while going under twice (37 in Game 2, 44 in Game 4). If Denver wants to take control of this series, Jokic needs to be at his best both passing and scoring - a freedom that’s been given to him by Nuggets head coach Mike Malone. The rebounds should be there no problem because of his near-monopoly on the defensive end and active hands on offense near the bucket.

Based on the odds, Vegas expects Jokic to get at least 45 total points, rebounds and assists. This 51 total, though, could pay out big if he puts together a stacked stat line like he did twice already this series - and it’s a number he’s due to hit based on his back-and-forth performances through the first four games.

If you haven’t been paying attention, Leonard isn’t missing much in this series vs. Philly. Through the first four games, he’s averaging 38 points on 61.8% shooting. Not only is he creating his own shots at will by driving to the rim, mid-range pull-ups and from deep - but he’s also crashing the boards and getting easy put-backs despite Joel Embiid lingering in the paint.

The Sixers have no answer defensively when it comes to guarding Leonard. There’s a chance they double-team him tonight, but that would likely require leaving another Raptor wide open at the three-point line - something Philadelphia head coach Brett Brown has yet to deploy. Instead, the Sixers have tried multiple bodies on him (Ben Simmons, Jimmy Butler, James Ennis, Tobias Harris) and each has gotten burned because Leonard’s pure size, strength and talent take over in one way or another.

You can bet longer odds for Kawhi to score more than 35 points, but this number seems safe considering he’s reached that total three times in these four games and scored 33 in the other.