Dan Servodidio gives us his early predictions at which horses could possibly win the Preakness. 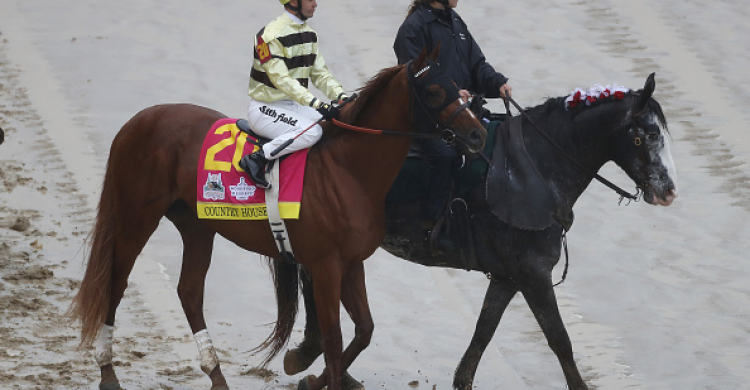 Following a controversial ending to the Kentucky Derby this past weekend, it’s time to turn our attention to the 144th running of the Preakness Stakes while the strategy of horse race betting is still fresh.

In case you missed it, we suggested placing bets on BOTH Maximum Security AND Country House last week. Of course, no one could have predicted the former getting disqualified after placing first - only to concede the title to the latter, who finished second. Still, you can count on us taking credit either way!

Preakness, the second leg of the Triple Crown races, will take place Saturday, May 18 at Pimlico Race Course in Baltimore, Maryland. The field of horses competing in the race has not yet been finalized, but you can find a list of candidates to run here as provided by the Pimlico public relations department to HorseRacingNation.com.

We already know Maximum Security will not be competing in the Preakness Stakes. Gary West, the horse’s co-owner, told NBC News that “there’s no reason to run a horse back in two weeks when you don’t have to,” referring to the lost chance at a Triple Crown for Maximum Security.

Many sportsbooks do not have odds set yet, but let’s take a closer look at some of the horses to keep an eye on over the next couple weeks as Preakness nears.

Controversy or not, Country House ran a fantastic race in the Kentucky Derby to even finish 1 1/2 lengths behind Maximum Security - and he should be among the favorites when odds are posted and the field is set for the Preakness Stakes. The horse is not a lock to compete, but trainer Bill Mott said Monday he’s “leaning toward” entering Country House because of the opportunity at a Triple Crown.

Country House ended up at 65-1 odds to win the Derby - the second-longest shot among the 19 horses who ran. The colt, running from the 20th post position, started out slow and spent the majority of Saturday’s race in the middle-of-the-pack before making a late push in the final turn. This is the norm for Country House, who regularly starts slow and saves his energy for fast finishes. Ahead of the Derby, the horse had only won once in his previous six starts but he ran near the end in all three of his Derby prep races with improving speed each time.

No matter what the odds are, we have to consider betting on the horse who just won the Kentucky Derby - whether it was by disqualification or not. Maximum Security will not be running so Country House has one less contender to worry about, too.

Trainer Bob Baffert had three horses running in the Kentucky Derby and Improbable will be the lone holdover he enters into the Preakness Stakes. Baffert, who has won Preakness a record-tying seven times, said Monday that the colt is on target to run on May 18 “if he has a good week.”

Improbable finished fifth and placed fourth in the Derby following the disqualification of Maximum Security - the best finish of the three Baffert horses (Game Winner placed fifth while Roadster was 15th). The horse went off as the Derby favorite at 4-1 odds and could very well be the Preakness morning-line favorite once the field is set.

Triple Crown-winning jockey Mike Smith will be aboard Improbable at Pimlico. The horse’s racing strategy is to get out to early leads out of the gate and fight all the way to the finish. In the Derby, he started out in fifth through the first furlong and stayed there most of the race, but never made a big enough push late - despite finishing just a couple lengths off the lead.

The 3-year-old colt failed to qualify for the Kentucky Derby but he’s expected to enter the field for the Preakness Stakes.

In his last five races, Anothertwistafate finished first three times and second the other two. One important note on these races, though, is that the three wins came on synthetic tracks while the second-place finishes were on dirt tracks. That will be the big question for this horse: whether he can be good enough on dirt as he is on synthetic surfaces.

A big factor for this horse - and any horse who didn’t run in the Derby - is the extra rest and preparation. The two weeks between the Preakness and the Derby is quick turnaround and Anothertwistafate’s trainer, Blaine Wright, feels the decision to hold out the horse until May 18 will benefit him. It’ll be five weeks since Anothertwistafate’s last competition, which is a huge leg up on Country House, Improbable and other horses who just ran in the Derby.

Another horse who didn’t compete in the Kentucky Derby but is expected to race at Pimlico. Alwaysmining should may not get proper respect when odds are posted for Preakness, but he looks like a smart bet right now.

The 3-year-old gelding has won each of his last six races - all on dirt tracks - including a victory at the Federico Tesio Stakes on April 20, which he won by 11 1/2 lengths. Alwaysmining had won his previous five races as a front-runner, but that most recent win required a late push to overtake the field. That type of finish shows this is a horse that doesn’t need a big lead to win but has the chops to overcome a poor start and finish strong.

As we mentioned with Anothertwistafate, the extra prep and rest time can’t be overlooked for the horses who skipped the Kentucky Derby and will be entering the field for Preakness. Alwaysmining could see favorable morning-line odds, too, depending on which Derby participants run it back for this race.