Dan Servodidio offers up his best bets for the NBA Finals. 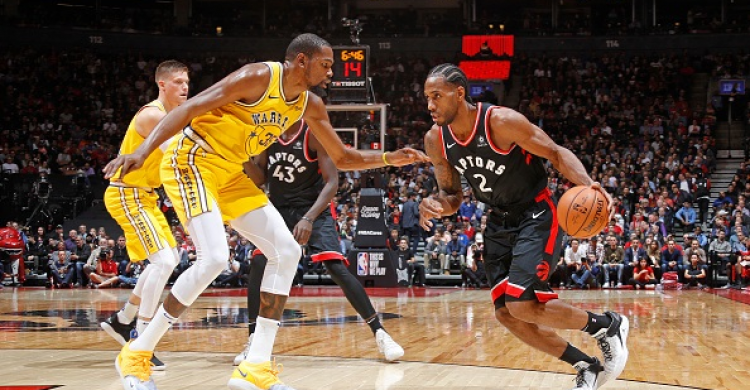 The NBA Finals tips off Thursday night with the Toronto Raptors hosting the Golden State Warriors for Game 1 - and there are plenty of ways to get exposure to the many odds, props and lines available. The Warriors are looking for a three-peat and their fourth title in five years while the Raptors are gunning for the franchise’s first-ever championship.

A number of sportsbooks have odds for the series result, NBA Finals MVP and individual player props - all of which we will narrow down to find the best bets ahead of tonight’s 9 pm ET tip.

The Warriors are -270 favorites to win the series while the Raptors are +225 dogs, according to VegasInsider.com.

The big thing to follow this series - outside of Golden State potentially cementing itself among the best in NBA history - will be the health of Kevin Durant. The defending Finals MVP of the last two years has missed the Warriors’ past five games with a calf strain and he’s already been ruled out for Game 1. Durant did travel with the team to Toronto, though, so there’s a possibility he’s back for Game 2 on Saturday if he’s able to practice.

When betting on some of these props, you’ll notice we have to take into account if and when Durant returns - and how limited he’ll be. More on that to come.

Alright, let’s dive into the best bets for the upcoming NBA Finals.

Can you believe that Curry hasn’t won the Finals MVP award during this run of titles? He didn’t play poorly, by any means, for the Warriors’ first three titles - yet Andre Iguodala was honored for limiting LeBron James in 2015 before Kevin Durant won it in back-to-back years in ‘17 and ‘18. Curry deserves to be the favorite this time around, though, because he’s been on an offensive tear ever since Durant got hurt. Curry scored at least 35 points in each game of the four-game sweep of Portland last round and he’s historically had success against Toronto - his 28.6 PPG against the Raptors is his best career average against any opponent.

Curry will begin this series as the Warriors’ No. 1 scoring option with Durant still sidelined. If he comes out hot in Games 1 and 2 before his teammate returns, there’s a real chance he locks up this award early. Still, though, there’s not a huge advantage in solely betting the favorite here - but all signs right now point to Curry claiming his first Finals MVP.

To put it simply, if you think the Raptors can pull off the upset in this series then Leonard is the only logical bet from Toronto to take home MVP honors. Barring an injury, Leonard will have the ball in his hands on nearly every offensive possession and his elite defense will be needed to slow down both Steph Curry and Klay Thompson. Leonard is averaging over 30 points per game and 50% shooting from the floor during this postseason as he is the top playmaker for the Raptors on offense whether he’s scoring himself or dishing it to his teammates for easy looks when he sees double and triple teams.

There’s a small chance Leonard wins this award even if the Raptors lose the series, but only once in NBA Finals history has the MVP been given to a player on a losing team - Jerry West in 1969. Considering LeBron James didn’t earn the award with his crazy stat lines the last two years, it’s hard to envision Leonard winning if the Raptors do lose. He’d have to average a triple-double and almost single-handedly push the series to seven games. If you’re betting on Leonard to win MVP, you may as well double-down on Toronto to win the title.

Durant is already ruled out for Game 1 and is still questionable to play in Game 2 and beyond as he’s yet to practice with the calf strain. There’s a legit possibility we don’t see Durant at all in this series if the Warriors win both games in Toronto and head back to Oakland with the series seemingly in hand. That fact alone explains the long odds for Durant to win a third straight Finals MVP - and it should keep people away from laying money on him.

Yet, there are scenarios where Durant wins this award. If the Raptors win one or two games at home and/or steal a game on the road to make the series interesting, we could see Durant return in Games 3 or 4 and be given the green light right away to literally shoot the Warriors to the title. If the Warriors split the first two games and Steph Curry struggles, Durant could return for Game 3 and become the main reason Golden State wins the title. Also (knock on wood) if Steph Curry, Klay Thompson or Draymond Green get injured at all, Durant could come back to play a bigger role than normal and see an increase in scoring. Yes, that’s a lot of “if’s” - but we likely won’t ever see better odds for a former two-time Finals MVP to win the award.

Everyone expects the Warriors to win the title, but the question remains: “How many games will it take?” Golden State just swept Portland in four games in the Western Conference Finals, but Toronto just battled back (after going down 0-2) to win four straight against Milwaukee to win the Eastern Conference Finals in six games. The Raptors will have the comfort of playing in their home arena for the first two games with the series beginning in Toronto - an advantage that can’t go overlooked with the intensity we’ve seen there all postseason. Oh, plus we have to factor in the Drake factor (only half-kidding there).

It’s a real possibility the Raptors win a game at home and then steal one in Oakland with a classic Kawhi Leonard “Beast-mode” game before the Warriors eventually win the championship. It’s worth noting that if the Warriors win in six, the title-clinching game will be the final possible game at Oracle Arena before the team moves to a new stadium next year.

As we mentioned earlier, if you think the Raptors have any chance in this series then you’d be smart to get action on Toronto in some capacity. Contrary to popular belief, they actually DO have a shot to beat Golden State - but it will likely take seven games to do so. The Raptors will have the home-court advantage as the series will begin in Toronto for the first two games and potentially end there for the final two matchups if everything lines up. There’s a potential scenario where the Raptors win one or both games to start, steal a game on the road in Oakland and then have the opportunity to close out at home. If you think the Raptors can win, either bet them to win in seven or in six (+1000).

Kawhi Leonard to Record Most Rebounds in the Series (+240)

Draymond Green is the deserving favorite in this category (-175), but it’s not hard to envision Leonard going all-out on both ends of the floor - no matter long this series goes. In the Game 6 win over Milwaukee in the Eastern Conference Finals, Kawhi grabbed 17 rebounds as the leading rebounder from both teams as he was active on both the offensive and defensive boards. For that whole series, Leonard averaged 9.5 rebounds and grabbed at least seven in each of the six games. Against the Sixers the series before, he averaged 9.9 rebounds and had double-digits in four of the seven games.

With DeMarcus Cousins out, the Warriors really don’t have a strong frontcourt as their best rebounder is usually Green when they frequently use small-ball lineups. Leonard will definitely be an active rebounder on both ends and we could see him flying around all series to grab second-chance points on offense and hovering in the paint on defense to prevent the Warriors from easy putbacks. Green may also have to battle on the boards with a combination of Serge Ibaka, Marc Gasol and Pascal Siakam - depending on who he’s guarding - while Leonard will be freed up to grab rebounds with much less competition.

Kyle Lowry to Record Most Assists in the Series (+210)

Draymond Green is, again, rightfully the favorite in this category (-160), but we can’t rule out the Raptors point guard. On defense, Lowry will likely be tasked with chasing Steph Curry around and making life difficult for the dynamic scorer. We’ve seen this with players in the past - most notably Damian Lillard in the Western Conference Finals - when you have to chase and defend Curry for the majority of a game or series, you’re shooting tails off and scoring becomes harder because of the tiredness factor. Instead, we can expect Lowry to be more of a facilitator on offense as he tees up Kawhi Leonard and Toronto’s shooters from the perimeter.

Lowry averaged 8.7 assists during the regular season, second in the NBA, but is only averaging 6.4 this postseason - largely because he’s been asked to score more with his teammates struggling. With this series starting at home for the Raptors, there’s a good chance some of those shooters start to get hot and take the pressure off Lowry to get it done on both ends. Plus, with Leonard is the top scoring option for Toronto, we’ll probably see some give-and-go plays involving Lowry and Kawhi on the outside to force Curry/Thompson to defend as well.

Drake WILL Massage Nick Nurse During Any NBA Finals Game (+250)

Yes, we’re diving into the Drake props for this series because - why not? Drake “massaging” Nick Nurse became a national story during the Eastern Conference Finals when he rubbed the shoulders of the Toronto head coach in Game 4 of that series. After the Raptors’ series-clinching Game 6 win, Drake gave Nurse another shoulder rub as the team was celebrating. What’s that saying? Once is luck, twice is coincidence, three times is a pattern? Something like that.

Picture this: the Raptors are up 20 near the end of Game 1, the arena in Toronto is giddy, Drake’s already been shown on ABC about 15 times already and he knows it because of the numerous texts he’s getting. In the closing minutes with the back-ups in and Nurse lingering in front of Drake’s front-row seat...the “6 God” massages Nick Nurse and cashes your ticket.

Now we’re just getting hopeful, but the payout here makes placing a small bet very interesting. For Drake to be escorted from the arena, he likely crossed a line somewhere and either put his hands on one of the Warriors or another fan or threw a drink or chair across the court. None of these scenarios is likely and it’s hard to imagine any of the Golden State players letting Drake get to them enough where an altercation ensues (though I wouldn’t put it past either of Draymond Green, DeMarcus Cousins or Kevin Durant).
One interesting scenario, though, is if Drake travels to Oakland for Games 3, 4 or 5 and causes a stir in the road arena. Maybe one of Drake’s boys gets into it with a rival fan and they toss the whole crew out. Maybe the arena decides to just kick Drake out because they don’t like him. Maybe a Warriors player “accidentally” bumps into Drake in the front-row while chasing for a loose ball, he knows it’s on purpose and needs to be held back and eventually gets escorted out. Yes, that idea came from Charles Barkley but can’t you picture Draymond Green doing something like that?