Dan Servodidio offers up his best bets for the Women's World Cup. 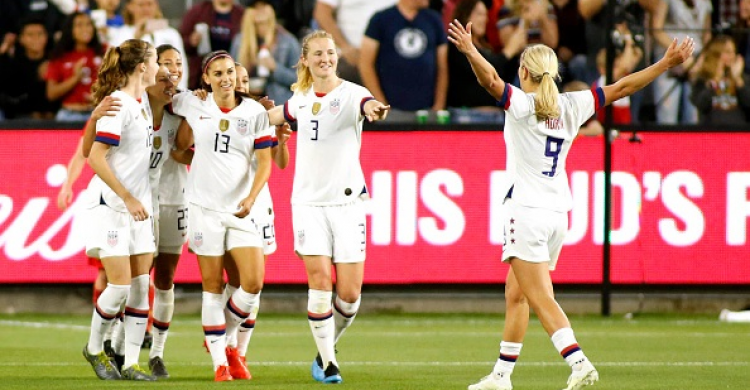 The U.S. Women’s National Team will try to defend their world title when the 2019 Women’s World Cup kicks off this Friday, June 7th from France. The tournament will conclude with the Final on July 7th.

Oddsmakers have made the United States the tournament favorite at +300 odds (according to Bovada and many other sportsbooks) as the 2015 defending champs look to win a remarkable fourth Cup title in this the ninth edition. The hosting French women have the second-lowest odds at +350 while the two-time champs Germany are third-best at +500.

You can bet on many other props and game lines before the World Cup gets underway with Friday’s opening match between France and South Korea at 3 pm ET. We will suggest which squads are worth betting on to ultimately hoist the trophy at their current odds. Plus, we’ll examine the best players who could win the Golden Boot as the tournament’s top goalscorer.

All the odds referenced here are taken from Bovada unless otherwise noted. Good luck!

The three-time winners of the women’s World Cup (1991, 1999, 2015) will now try to become the first nation to win back-to-back women’s titles since Germany did it in 2003 and 2007. The United States are deservedly the favorites this summer because they have been practically unbeatable over the past year-and-a-half. The squad was undefeated for the entire 2018 season and has lost just once (to France in a friendly in January’s SheBelieves Cup) in the past 38 matches in all competitions. They went a perfect 5-0-0 in CONCACAF qualifying matches for the Cup where they outscored their opponents 26-0.

Even as the favorites, the U.S. are a strong bet to win this tournament considering they have never finished worse than third at the World Cup. The only downside is how the bracket could shake out. If all the favorites advance, the U.S. will have to potentially defeat France in the quarterfinals and then England in the semifinals. It’s a tough road but if any team is capable, it’s the United States who boast some of the top talent in this competition.

In any World Cup or international soccer tournament, the host country needs to be in consideration because of the unrivaled home-field advantage - but France is still a worthy bet to win it all. The French men won the World Cup last year in Russia and now the women will look to follow suit on their home soil. The fourth-ranked team in the world have been placed in a relatively easy group that includes Norway (12th in the world), South Korea (14th) and Nigeria (38th) - giving them a clear path to advance.

As mentioned above, the big hurdle will be a potential quarterfinal matchup with the United States. Should they get past the odds-on favorites, France could be in line for their first World Cup title. One deterring factor, though, is France’s inability to get past the quarters in recent major competitions - they reached the quarterfinals in each of the 2017 UEFA Women’s Championships, the 2016 Olympics and the 2015 World Cup but failed to advance. France does enter this tournament on a hot streak, however, going an impressive 7-0-1 in friendlies in recent months - with only a single loss to Germany.

The determining factor for Germany’s chances at a third World Cup title hinges on their ability to win their group. If the German women win Group B, they will automatically move to the more favorable side of the bracket that has them likely avoiding the United States, France and England - coincidentally, the three teams with shorter odds to win the tournament than Germany. Bovada has the Germans at -400 favorites to win Group B over Spain (ranked 13th in the world), China (16th) and South Africa (49th).

Germany, winners of the 2003 and 2007 World Cups, enter this tournament very much in form. They went 7-0-1 in their qualifying matches with a massive 38-3 goal differential. The Germans also recently won the 2016 Olympics over Sweden and reached the quarterfinals of the 2017 Women’s Euros, losing to Denmark. If you’re betting on the U.S. or France on one side of the bracket, taking Germany on the other, easier side could be a nice complement to get exposure to the top favorites overall.

The Dutch women are the one team with longer odds who could make noise in this tournament. The Netherlands are making only their second World Cup appearance, but they have been on the rise in the women’s game for much of the past three years. They won the 2017 Women’s Euros as the host nation - their first European title ever - and went 6-1-1 in qualifying matches with a 22-2 goal differential. The Dutch are currently ranked 8th in the world and are led by Barcelona star Lieke Martens and Arsenal’s stud forward Vivianne Miedema (more on them below). Whether they finish first or second in Group E, they will find themselves on the favorable side of the bracket (like Germany) avoiding the powerhouses of the United States, France and England.

The American enters as the odds-on favorite to be the World Cup’s top goalscorer as the best striker on the team favored to win the whole tournament (+300). When betting on the Golden Boot winner, it’s always important to consider how far that player’s team could go in this competition. For Morgan, this is a strong bet since the United States are the favorites to win it all and -1000 favorites to win their group - which will include two matches against weaker opponents in Chile (ranked 34th nationally) and Thailand (39th).

Morgan is coming off an impressive 2018 season when he tallied 18 goals in 19 matches and took home Player of the Year honors for the U.S. women’s team. In five qualifying matches, Morgan scored seven of the 26 U.S. goals as the squad breezed by their easy competition - a similar scenario the team should face in their group stage until they play tougher opponents in the quarterfinals and beyond. If you compare Morgan’s seven qualifying goals to past winners of the Golden Boot, it’s pretty favorable. Germany’s Celia Sasic took home the 2015 award with six goals, Japan’s Homare Sawa had five in 2011 and Marta scored seven for Brazil in 2007. Yes, Morgan’s qualifying opponents were not on the same level as World Cup competition - but there’s a chance Morgan and Co. rack up the goals against their easy group opponents.

If you’re betting on France to win the Cup and looking for a French woman to pair, Valerie Gauvin looks like the better bet at her slightly longer odds over teammate Eugenie Le Sommer (+700). Even if you don’t think France will win the tournament, this team will certainly be scoring goals in bunches and should advance far enough for one their players to challenge Alex Morgan for this award. The host nation will not only benefit from having an entire country rooting them on, but they also enter this tournament in terrific form - a 12-0-1 record in their last 13 matches, outscoring opponents 46-4.

In six friendlies in 2019, Gauvin scored four goals for France and she also tallied a hat-trick when France played Nigeria in a 2018 friendly - Nigeria is one of France’s group opponents. The one factor that pushes Gauvin over Le Sommer, though, is how the French have lined up in recent matches. In each of the past four matches, Gauvin has been the lone striker in a 4-2-3-1 formation - a good indication this is how France will line up in this tournament, which will increase the amount of scoring opportunities for Gauvin at the top.