Dan Servodidio brings you his best bets from this weekend's 119th US Open at Pebble Beach Golf Links. 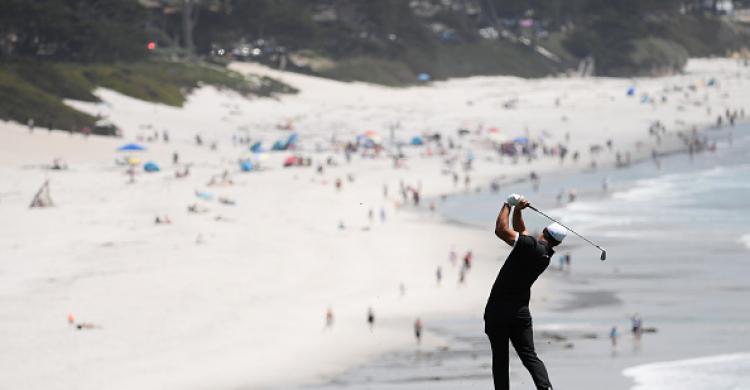 Welcome to U.S. Open week as this year’s third major golf tournament returns to the iconic Pebble Beach Golf Links in Pebble Beach, California. The first round begins the morning of Thursday, June 13th and concludes, per usual, on Father’s Day this Sunday, June 16th.

According to Bovada and many other sportsbooks, we have a trio of golfers atop the odds listings before Thursday’s first round gets underway - Brooks Koepka, Dustin Johnson and Rory McIlroy all have +850 odds as the co-favorites to win the tournament. Tiger Woods (+1100) and Patrick Cantlay (+1800) round out the rest of the top five, while Jordan Spieth (+2000), Justin Rose (+2500), Rickie Fowler (+2500) and Xander Schauffle (+2500) are next in line. You can find a full list of the odds at Bovada or your favorite sportsbook.

Pebble Beach is a shorter golf course than most and thus doesn’t always require long drives off the tee to have good rounds. Of course, the bombers in this field of golfers will still benefit from length on their first shots - but the shorter holes will allow for others to remain competitive unlike other courses that favor long drives. The fairways will be tighter and the rough will be thicker than when the PGA Tour stopped at Pebble Beach back in February. This means golfers will have more of an incentive to hit straight drives rather than focusing on length off the tee.

Let’s now dive in to which golfers you should be betting on before the U.S. Open tees off on Thursday morning. All odds referenced here are taken from Bovada’s current listings at the time of this writing.

Even if you think someone else will win the U.S. Open this year, you need exposure to the golfer who’s won this tournament in both of the previous two years and just dominated a month ago to win the PGA Championship. Koepka looked pretty much unbeatable at Bethpage Black in May as he took home his fourth major title - and he did the same at Erin Hills and Shinnecock Hills in 2017 and 2018 as he plays for a third straight U.S. Open win. Koepka certainly has the pedigree in majors and at this event to warrant a bet, yet he isn’t the clear favorite this week for a reason.

For starters, Koepka doesn’t have much experience at this course having only played here once in his professional career - finishing eighth at the 2016 AT&T Pebble Beach. Plus, he ranks 59th in strokes gained/short game in this field over the past 50 rounds. This doesn’t bode well for Koepka on paper since this course requires a good short game given its smaller greens than normal. He also looked a bit off his game last weekend at the RBC Canadian Open - finishing T-50th in his first tournament since winning the PGA title. Despite all these downsides, Koepka has always raised his play at majors and will be hungry to three-peat at the U.S. Open.

Outside of Tiger Woods and his historic play at Pebble Beach in the past, no other golfer in this field has been as dominant at this course than DJ. At the AT&T Pebble Beach tournament, Johnson has two wins (2009 and 2010), two T-2’s (2014 and 2018) and three other top-fives. Aside from this impressive course history, he deserves to be a co-favorite alongside Brooks Koepka and Rory McIlroy because of his elite level of play in majors this year. Johnson has a pair of runner-up finishes at this year’s first two majors (T-2 at the Masters and a solo second at the PGA Championship) and he’s compiled 10 rounds in the 60’s in his last three tournaments.

On multiple occasions, Johnson has been in contention to win his second major since winning the U.S. Open in 2016 - but he’s yet to finish the job. To do so this week, DJ will need at least one great round to put pressure on Koepka and Co. - something he’s failed to do in majors this season. Johnson’s best single round score in 2019 majors was a second-round 67 at last month’s PGA Championship. He definitely has the talent to post a low-60’s round, though, as he currently leads the PGA Tour in scoring average (69.13) and ranks eighth in driving distance (310.2 yards). There’s a good chance Johnson will be near the top of the leaderboard come Sunday - it’s simply a matter of whether he can get over the hump of finishing at a major.

If you’re unfamiliar with what Tiger can do at Pebble Beach, let us remind you of his dominant 15-shot victory here at the 2000 U.S. Open. Yes, the 2019 version of Tiger is a totally different golfer and that mind-blowing win is impossible to repeat - but he’s still very familiar with this course and the 43-year-old has taken tons of pressure of himself after winning the Masters this year. Sitting just outside of the three odds-on favorites, a healthy Tiger at Pebble Beach is tough to ignore.

After missing the cut at the PGA Championship, he finished T9 at the Memorial Tournament two weeks ago and shot an impressive final round of 67. Woods hasn’t been the best putter this season - which could hurt him at Pebble Beach - but his strength has been in the iron play, where he currently ranks fourth in this field in strokes gained/approach over the past 50 rounds. Plus, it’s encouraging that Tiger played a practice round at Pebble already this week - which is miles ahead of where he was going into the PGA Championship.

Cantlay is coming off arguably his best win of his career at the Memorial Tournament at Muirfield Village two weeks ago and he’s been impressive in majors this season. He finished T3 at the PGA championship last month and T9 at the Masters in April, making him the only other golfer outside of Brooks Koepka and Dustin Johnson to finish in the top 10 in both majors. Cantlay has also been one of the more consistent golfers in 2019. Over his past 50 rounds on the Tour, Cantlay is among the best in the world as he’s currently fourth in strokes gained/ball-striking, fifth in strokes gained/tee-to-green and fifth in strokes gained/approach. The only worry for backing Cantlay is his struggles in the short game and putting - both of which are critical at Pebble Beach. The young golfer has yet to win a major and he could get over the hump this week - or at least make the top 10 yet again.

Fleetwood was in contention heading into the weekend at the PGA Championship last month, but poor play in the final two rounds cost him a chance at his first major - yet we can’t ignore his impressive finishes at the past two U.S. Opens. Fleetwood had a 63 in the final round of last year’s tournament to finish second, and he had a fourth-place finish at Erin Hills two years ago. Yes, Pebble Beach is a tougher course this time around - but he has the iron play and world class ball-striking ability to stay in contention and potential finish top 10. It also helps that Fleetwood scouted this course in February to familiarize himself with Pebble.

Snedeker has been in the mix all season, only missing two cuts out of 18 tournaments, and he has three top 10 finishes in 2019 - most recently a T4 at last weekend’s Canadian Open. That top-5 finish is encouraging as he’s been improving at each of his four events since missing the cut at the Masters in April. A major victory has alluded Snedeker so far in his career, but he does have three top 10 finishes in the past five U.S. Opens and his firm, short putting style is ideal for this Pebble Beach course. Maybe we don’t bet Snedeker to win this week, but you can definitely throw him in parlays or one-offs to finish top-10 or top-15.