Dan Servodidio brings you his best bets for Thursday's NFL Week 4 contest between the Eagles and Packers. 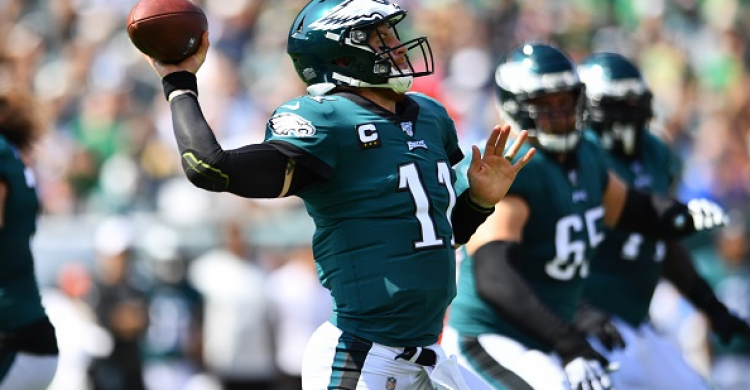 How did your Week 3 bets hold up? Personally, last Thursday night’s game between the Titans and Jaguars was up-and-down for us as we hit the under (39.5 total) but missed on the right team winning (Jags). Still, we’re back for another matchup on Thursday Night Football and it’s time to lay some money down before kickoff!

The Week 4 TNF matchup features two prospective playoff teams from the NFC as the Green Bay Packers enter as 4.5-point favorites over the visiting Philadelphia Eagles. The current total sits at 45.5 points, according to the Westgate Superbook in Las Vegas as of Wednesday morning. Last week, we went 1-1 with our TNF bets and we’re now 2-4 overall with our weekly Thursday picks.

So far this season, the Packers are 3-0 and are coming off a 27-16 victory over the Broncos in Week 3. The Eagles, meanwhile, are 1-2 with two straight close losses to the Falcons and Lions.

These TNF matchups are historically more low-scoring than the weekend NFL action - but expect more points than normal this week between two of the NFC’s top offenses. The Eagles are averaging 25.3 points per game over the first three weeks while the Packers are scoring 24 points per game over their last two games. Philadelphia should have their offense almost back to full strength with Alshon Jeffery and Dallas Goedert both expected to play after sitting out last week’s loss. This should help Carson Wentz be comfortable throwing the ball to his more trusted receivers. Plus, Philly’s two-headed backfield of Miles Sanders and Jordan Howard should find plenty of room to run against a Green Bay defense that is giving up 131 rushing yards per game. On the other side, expect Aaron Rodgers to pick apart the shaky Philly secondary all night long. If Case Keenum, Matt Ryan and Matthew Stafford could combine to throw for 293.7 passing yards per game against this Eagles D - we can safely assume Rodgers will have his way. The game should be offense-dominated and 23 or more points from both teams seems likely.

If the Eagles made one or two extra plays late in their two losses this season, the team could easily be 3-0 right now - and it would be interesting to see what the spread looks like in this fictional scenario. Instead, the 3-0 Packers are the clear favorites - but this game seems closer than what Vegas is projecting. The Philadelphia offense should benefit a ton from Alshon Jeffery and Dallas Goedert both back healthy and this will create mismatches for the Green Bay defense. Plus, the Packers’ rush defense has some holes in it right now and the Eagles’ backfield duo of Miles Sanders and Jordan Howard could exploit that. The Packers may still win the game, but it could be by only a field goal late in the game. The Eagles’ two losses this season were by four and three points to the Falcons and Lions, respectively, and Philly could have easily won both those games. Take the points for the road team and hope for a close one late!

Unfortunately most sportsbooks don’t release NFL player prop bets until the morning of that particular game, but consider betting on the following players ahead of Thursday’s matchup.

While the Eagles’ secondary is one of the worst units in the league, their rush defense remains one of the best. Philadelphia is allowing just 57 rushing yards per game through the first three weeks and they’ve yet to allow a single opposing rusher to gain more than 44 yards in a game - and two of those running backs were Atlanta’s Devonta Freeman and Detroit’s Kerryon Johnson. This does not bode well for Aaron Jones. The Packers’ lead back ran for 16 yards in Week 2 but was held to 19 and 39 rushing yards, respectively, in Weeks 1 and 3. Expect another sub-50 rushing yards from Jones again this week and hammer the under on his rushing total - which should be in the 50-60 yard range.

By now, you’re surely aware of how bad the Eagles’ secondary is and this should benefit Packers receiver Davante Adams on Thursday. Through the first three weeks this season, Philadelphia’s defense has allowed at least 100 receiving yards to four different receivers with at least one in every game. Adams, meanwhile, is Aaron Rodgers’ top pass-catching option and he should see a ton of targets throughout the game. He had 106 receiving yards in Week 2 but was held under 60 in the two other games. Adams should easily get back above 100 yards this week and we should strongly consider taking the over on his receiving yards prop.

Jeffery has missed the last two games with a calf injury but he’s expected to suit up on Thursday after being a full participant in Philadelphia’s practices this week. Jeffery being back on the field will be a welcome sight for Carson Wentz as he’s a sure-handed receiver who should definitely outperform the Eagles’ backup receivers who had drop issues the past two weeks. Even with Zach Ertz as Wentz’s top passing option, Jeffery should still see a ton of targets assuming he’s healthy and playing the whole game. The wideout had five receptions on seven targets in Week 1 but we could see him rack up eight or more catches on Thursday - especially if the Eagles are trailing and Ertz is being double-teamed. Because Jeffery’s injury situation is tough to project, Vegas could have a lower reception total than normal in his first game back so let’s look to get him at a 4-5 receptions prop.