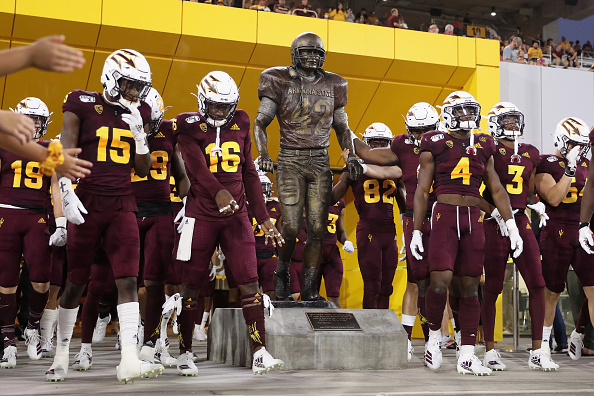 The 2021 college football season continues on with Week 6 already underway! We have your Best Bets ready to go with a couple Friday night matchups covered and then plenty of picks for Saturday’s action! Last week was up-and-down for our bets but we did hit on some key matchups - like Kansas State +11 ATS and Cincinnati’s moneyline. Win or lose, though, it’s time to wipe the slate clean and find some new matchups to exploit in Week 6 of college action. First off, here’s how my picks have fared so far this season:

The following odds are taken from DraftKings Sportsbook at the time of this writing, but feel free to shop around for the best numbers. Without further ado, let’s get to the Best Bets for Week 6 in the college football world.

PLAY OF THE WEEK

Stanford has no doubt surprised college football bettors this season with outright upset victories over USC and Oregon and now a 3-1 against-the-spread mark over the past four games. The Cardinal could be a popular upset pick on Friday too, but Arizona State is the right side to back as the much stronger team with a key mismatch that we’ll get to in a minute. First off, there might be a bit of a hangover for Stanford coming off its emotional overtime upset of a top-5 ranked team a week ago. They’re in the midst of a very tough stretch of the season with three consecutive matchups vs. UCLA, Oregon and Arizona State - and the Sun Devils should benefit from being the last team on that list.

Arizona State, meanwhile, just earned a convincing 19-point road win over UCLA last week and has now covered both of its conference matchups - including a 22-point victory vs. Colorado. Where the Sun Devils will have a massive advantage tonight is in the run game while on offense. They’re averaging 204 rushing yards per game (27th-best in the country) and have already racked up 18 rush TDs over the first five games (fourth-best). Then there’s the Stanford defense that’s allowing 213 rushing yards per game (14th-worst in the country) and 12 rush TDs over five contests. UCLA exploited the Cardinal rush defense in its double-digit win and Arizona State will do the same this week with a three-headed ground attack of Rachaad White, DeaMonte Trayanum and dual-threat QB Jayden Daniels. Back ASU to win by at least two touchdowns and grab the over on their team total after scoring 35+ points in four of five games thus far.

BEST OF THE REST

After handily beating Notre Dame on the road last weekend, Cincinnati now has a legit path to the College Football Playoff if it wins out. Some may think this matchup vs. Temple could be a letdown spot - but the Bearcats are still very much motivated to lay a beatdown on every remaining opponent to leave no doubt in the CFP committee’s mind. This game could go very similarly to Cincy’s 49-14 victory over Miami (OH) when they covered as sizable 22.5-point favorites at home a month ago. The ‘Cats are now 3-0 ATS vs. FBS opponents this season and beat both Indiana and Notre Dame on the road by 11 each.

Meanwhile, Temple has not been competitive against in its toughest games this year. The Owls lost by 25 to Boston College and by 47 to Rutgers - failing to cover both times as underdogs - and now have to face a Cincinnati team that’s even better. It’s worth noting that Temple just upset Memphis at home last week in a high-scoring, back-and-forth battle - and it could lead to a hangover for this matchup. This week’s spread may seem large, but Cincinnati is simply in a whole different talent level than Temple and should have no problem covering. As for the first half spread, Cincy went up 17-0 over Notre Dame last week before halftime and led Miami (OH) 35-0 at the half.

We talked about this last week when correctly backing Kansas State to cover against Oklahoma - it’s only a matter of time until the Big 12 favorites catch an outright loss as they continue to let teams hang around. Although the Sooners are undefeated, they are 0-4 ATS against FBS competition and have been in one-score games at the final whistle each of the last three weeks. Now OU has this Red River Rivalry matchup where Texas presents the toughest challenge to date.

The Longhorns have gone 3-1 ATS this season as Vegas continues to undervalue them - and their only loss in real life came against a good Arkansas squad back in Week 2. Texas has the offensive firepower to go toe-to-toe with Oklahoma and force Spencer Rattler to be at his best - which hasn’t been the case for much of this season. The only reason Oklahoma is favored at a neutral site this weekend is because of their top-5 ranking and Vegas knowing the general public will back the Sooners. But, honestly, Texas has a real shot at winning outright and their +140 moneyline is worth a look too.

Are we really thinking about betting on a matchup between winless UConn and winless UMass?! Believe it or not, there’s actually a clear side to back here if you want to make your Saturday a bit more interesting. Connecticut has been playing notably better since head coach Randy Edsall left the program in mid-September - scoring 21+ points and covering the spread in each of the last three games sans Edsall. The Huskies also nearly pulled off straight-up upsets over Wyoming and Vanderbilt the last two weeks - despite being big underdogs in both - and now is the time for them to finally get that elusive W.

It’s not surprising to see UConn favored on the road here because Massachusetts is even worse. The Minutemen have mustered only 10 total points over the past two games combined while failing to cover as sizable dogs to Coastal Carolina and Toledo. Their 47.2 PPG allowed is dead last among all FBS teams and the 14.6 PPG scored is third-last - compared to UConn’s 40.2 PPG allowed and 16 PPG scored. Obviously both teams are terrible, but let’s back the Huskies to get a win here - because why not?!

Though MACtion has earned the reputation of having high-scoring games, this matchup between Ball State and Western Michigan likely won’t fall in that category. Ball State has played to the under in four of five games this season and in seven of the last eight dating back to last season. A big reason for these unders consistently is because the Cardinals are averaging only 19.2 PPG this season with a subpar offense that’s been held to 13 points or fewer three different times already.

Meanwhile, Western Michigan has played to the under in four of five games as well this season. Outside of allowing 40+ to Pittsburgh and Michigan - which is understandable - the Broncos have held their three other opponents to 17, three and zero points. Those three matchups came when WMU was favored - which is the case this week as 11-point favorites. Expect this one to be a lot more of a defensive battle than Vegas is suggesting.

Some thought that last week’s matchup vs. Ole Miss would be Alabama’s toughest test during the regular season before the inevitable showdown with Georgia in the SEC title game. Well, a 21-point victory over the Rebels on Saturday tells us that we shouldn’t doubt the Crimson Tide right now. Nick Saban’s squad is now 3-1 ATS vs. FBS opponents this season and the lone failure to cover was a two-point win on the road to Florida - which may go down as the actual toughest test for ‘Bama until the postseason.

This weekend, it’s Texas A&M’s turn to face the reigning national champs and it could get ugly early. The Aggies’ defense was supposed to be a strong point but it’s allowed 20+ in each of the last two games (vs. Arkansas and Mississippi State). Then there’s the A&M offense that’s been significantly worse ever since starting QB Haynes King got hurt in Week 2. They’ve gone 1-3 ATS since King went down as Vegas continued to overvalue a team that had national title hopes before the season began. However, the Texas A&M offense won’t be able to hang around with a powerful Alabama attack that should build a big lead early and make it impossible to keep up. Back the Tide with a trio of picks here.