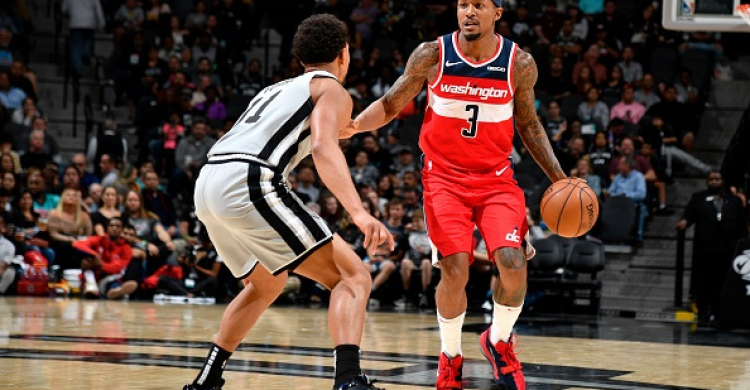 Who else is enjoying the NBA season so far?! The 2019-20 campaign is now a week old and we have a solid 11-game slate on Wednesday night. As always there are a ton of All-Stars, talented rookies, playoff teams and up-and-coming squads in action and it gives us a chance to bet on some of our favorite lines, spreads and totals.

We’re off to a hot start with our NBA Best Bets this season with a 6-1 record on the year. On Monday, we went 3-1 with our suggestions with the Nuggets, Suns and Pistons all coming through for us. So let’s keep the hot streak going! All odds referenced below are taken from Bovada Sportsbook in Las Vegas as of Tuesday evening. Let’s dive in!

By now you’ve surely heard the national criticism surrounding the Warriors and their terrible defense this season - but it’s all warranted as opposing teams have been scoring a ton against them. Over the first three games, the Warriors have allowed 128 points per game to the Clippers, Thunder and Pelicans and have the league’s worst defensive rating thus far. This simple fact should allow the total to go over because while Golden State will almost certainly give up a ton of points to the Suns, they can also light up the scoreboard themselves. The Warriors have the league’s ninth-best offensive rating this year and are always a threat to score 130 - just like they did in the last game. Steph Curry and Co. should be motivated tonight to win their first game in their new arena and it might take 120-130 to do it with how bad their defense is. Phoenix, meanwhile, is averaging 120.3 points per game (sixth-best in the NBA) and already have an impressive upset win over the Clippers under their belt this year.

You might think we’re crazy picking the lowly Wizards against the championship contending Rockets - but we don’t need them to win, just to cover this 8-point spread. And it’s certainly not out of the question to see Washington lose by seven or less tonight. The Wizards are finally playing their first home game of the year after beginning the season with three straight on the road. They won one of those games outright (Thunder) and lost the other two by eight and two points to Dallas and San Antonio, respectively. Washington should benefit a ton not only from going back home finally, but also having not played since Saturday. Meanwhile, the Rockets’ two wins this season have come by three and four points over the Pelicans and Thunder, respectively. Plus, while James Harden is lighting up the scoreboard, he’s not doing so efficiently as he’s shooting 28.6% from the field and 15% from three. These struggles have allowed opposing teams to hang around and that should be the case for the Wizards as 8-point home dogs tonight.

The Magic are arguably one of the worst teams in the league - and yet they are favored by nine points tonight against the visiting Knicks. New York may not be that good either, but it’s really hard to envision Orlando winning by that wide of a margin. The Magic have the league’s worst offensive rating through three games and they are averaging just 96.5 points per game - the second-lowest in the NBA. The only reason they are getting this much love from Vegas is because their defensive rating is the NBA’s second-best currently. Even though the Knicks are on the road, they should be able to keep this one within nine. New York has just one win on the year but they had to go through a gauntlet to begin the season against the Spurs, Nets and Celtics - and they are actually averaging more points per game (105) than the Magic. Rookie standout R.J. Barrett is starting to find his offensive groove and he exploded for 15 rebounds in the Knicks’ lone win over Cleveland last game.

The 0-3 Pacers are clearly struggling without the injured Victor Oladipo and it’ll likely take another game or two before they find their first win. Something will have to give in this matchup as Indiana plays at the league’s third-slowest pace while Brooklyn runs at the fifth-fastest tempo. We see the Nets pushing the tempo to a limit where the Pacers can’t keep up on the scoreboard and ultimately fall short. We are taking the moneyline here, though, because of Brooklyn’s tendency to play in close games this year. The Nets’ lone win came by just four points over the Knicks and their two losses came in overtime to the Timberwolves and Grizzlies. However, both those blemishes came on the road for Brooklyn while they are 1-0 thus far at home. Expect that trend to continue tonight with the Pacers failing to keep up with Kyrie Irving and Co.