Dan Servodidio brings you his best bets for Thursday's NFL Week 10 contest between the Raiders and Chargers. 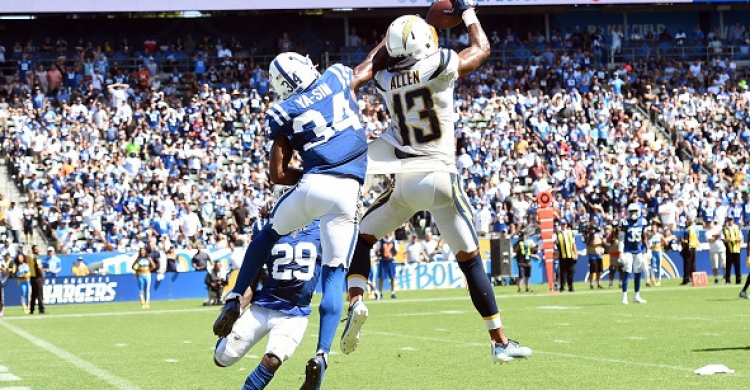 How did your Week 9 bets hold up? Here at Wager Alarm, last Thursday night’s game between the 49ers and Cardinals was not a great one for us as we missed on both San Francisco (-10.5) covering and the 43-point total going under. Still, we’re back for another matchup on Thursday Night Football and it’s time to lay some money down before kickoff!

The Week 10 TNF matchup features an AFC West showdown between two squads looking to make noise in the division and enter playoff contention. The Los Angeles Chargers (4-5) are on a two-game winning streak after last week’s impressive home win over Green Bay. Meanwhile, the Oakland Raiders (4-4) are also coming off a good win over Detroit on Sunday to get them to 3-1 at home this year.

The Chargers enter as slight 1.5-point favorites and the current total sits at 49 points, according to Bovada Sportsbook in Las Vegas as of Wednesday evening. Last week, we went 0-2 with our TNF best bets and we’re now 7-9-1 overall with our weekly Thursday picks.

It’s interesting to see that the Chargers’ last eight games have all gone under this current total while the Raiders’ last three have all been over. Something will have to give in this trend, and we’re banking on the Los Angeles defense to limit the Oakland offense just enough to keep it below 49 total points. The Chargers are allowing just 18.7 points per game (8th-best in the league) - largely because of their 5th-ranked pass defense, headlined by some stellar edge rushers. This could end up being a huge problem for the Raiders, who have had one of the best offensive lines this season but could be without two starters in Trent Brown and Rodney Hudson. If they are indeed out (or playing hurt, nonetheless) this could be a nightmare for Derek Carr behind center and Josh Jacobs running the ball. We shouldn’t expect a ton of points from this Oakland offense tonight and it will keep the total low - even if the Raiders come out victorious. The Chargers, meanwhile, haven’t scored more than 26 points since Week 1 as they routinely play in lower-scoring games.

We just laid out how Oakland’s offense could be a lot worse than normal if both Trent Brown and Rodney Hudson end up sitting out. The starting offensive linemen are questionable and their injuries would be a huge downgrade to a Raiders team that’s scored at least 24 points in five straight games. Los Angeles’ pass-rushing duo of Joey Bosa and Melvin Ingram could cause a ton of problems for Derek Carr and make the Oakland offense one-dimensional trying to feed Josh Jacobs in the running game. The Bosa-Ingram duo combined for three sacks last week vs. Green Bay and their constant pressure on Aaron Rodgers clearly affected the game’s outcome - a Chargers’ 15-point win. This line basically makes the game a pick’em and we think the Chargers come out ahead as their offense seems to be back on track with a new offensive coordinator calling plays and Melvin Gordon being used a lot more to complement Austin Ekeler, Philip Rivers and Co.

Revenge game narrative! Williams spent the first four seasons of his career with the Chargers and this will be his first time facing his old squad. We’ve seen the “revenge game” come into play multiple times this season and Williams is just the latest one who can take advantage with a big performance. The receiving yards prop for him could be relatively low, too, because he’s only topped 50 yards twice this season and is coming a four-catch, 48-yard output last week. Derek Carr could be looking deep to Williams tonight, though, because a couple key injuries on Oakland’s O-line may force the offense to look downfield for big plays in order to move the ball. If we can get one big catch from Williams, he should go over this prop.

After starting the year off strong, Allen has slowed down a bit lately as he hasn’t eclipsed 61 receiving yards since Week 3. This poor trend could keep his receiving yards prop lower than it should and we can take advantage of this. Allen will benefit from facing a poor Raiders secondary that’s allowed the most passing yards per game this season and coming off a game where they allowed two different receivers eclipse 125 receiving yards (Marvin Jones and Kenny Golladay). Oakland has now allowed four 100-yard receiving games by wideouts over the last three weeks and Allen could easily make it five in four games if he gets back to seeing his normal double-digit targets - something that’s happened five times already this year.

Since he returned from his holdout in October, Gordon had not been getting the touches or yardage that we’ve been accustomed to. That changed last week, however, when Gordon saw 20 carries and racked up 109 total yards and two touchdowns. The key difference between the last game and the earlier part of the season is that the Chargers changed offensive coordinators beforehand. Clearly, the new play-calling favored Gordon over Austin Ekeler and we could see this trend continue on Thursday because the increase in touches for Gordon resulted in a big win over Green Bay last week.