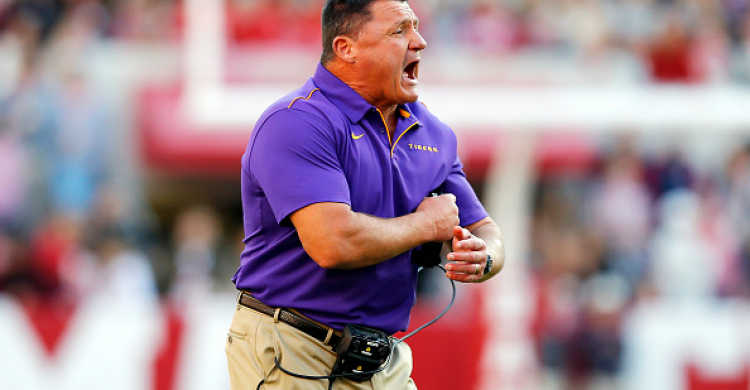 Who else wants four more quarters of LSU vs. Alabama? College football’s best game of the year certainly lived up to the hype and the Tigers’ victory will have some major implications on who will participate in the upcoming CFP Playoff and National Championship games. Bovada has adjusted their odds for which program could win the title on January 7th, and there’s some clear value we can take advantage of.

As of Monday night, the top three teams in Bovada’s odds to win the 2020 College Football title are pretty close with Ohio State (+200), Clemson (+250) and LSU (+275) the clear favorites. Outside of them, though, the field is wide open for who the fourth team in the Playoff could challenge for the national championship. Let’s look further down the list and break down the best bets right now outside of those top three teams.

While all the national buzz from the SEC has centered around LSU and Alabama this season, Georgia has quietly hung around and could potentially swoop in and steal one of the four Playoff spots away. If the one-loss Bulldogs win their final three regular season games, they will get a match-up vs. LSU in the SEC championship - and a win there would certainly give them a berth into the CFP. The Playoff committee ranked them 6th last week and that was before Alabama and Penn State both lost. Assuming Georgia meets up with LSU in the SEC title game, we could potentially have a #1 vs. #4 match-up with the winner cementing their place among the top four teams heading to the Playoff. And if they upset the Tigers in a few weeks, Georgia looks like a nice value right now with significantly higher odds than the top three programs.

Believe it or not, Alabama still has a chance to reach the Playoff even though they lost to LSU this past weekend. If one or more of the top four teams lose in the coming weeks - or in the conference title games - the Crimson Tide could move right back into the mix if they win out themselves. ‘Bama could either suffer or benefit from not having to play in the SEC championship, though. On the one hand, they can’t lock down a spot in the CFP with a resume-building conference title victory. However, they also avoid the possibility of losing at the worst possible time - something that could potentially happen to LSU now. Assuming Georgia beats LSU in the SEC title game and one of Clemson or Ohio State lose as well, there’s still an outside chance for Alabama to get right back into the top four by the end of the season. And are we really counting out Nick Saban in the Playoff with a second chance?

Did you know Minnesota is still undefeated? Many expected the Golden Gophers to lose to Penn State on Saturday but they held on at home to stay unbeaten. Now, in order for Minnesota to even have a chance at the title they need to win out in the regular season and then beat Ohio State in the Big Ten championship game. It’s definitely a tough road considering they still have to play two Top 25 programs in Iowa and Wisconsin before their potential meeting with the Buckeyes. Still, everyone assumed the Gophers would lose to Penn State and they proved they can hang with the top class in the conference. It’s a big if - but IF Minnesota wins out and then upsets Ohio State, they will definitely be among the four Playoff teams. The committee can’t ignore an undefeated team from a Power 5 conference that just won the Big Ten title. And at that point, anything could happen in the semifinals.

The Pac-12 conference frankly does not get the same national recognition as the other Power 5 programs - making it tough for a one-loss team from the West to reach the Playoff. Still, Utah could put themselves right into the conversation if they win their final three regular season games and then beat Oregon in the Pac-12 title game. A lot may have to happen for a one-loss Pac-12 team to vault ahead of other one-loss teams - but it may come down to when some teams take that first L. Let’s map it out. If Clemson, LSU and Ohio State all lose in these final weeks or in their respective conference games, the winner of Oregon-Utah could certainly find themselves among the top four teams come January. Now, beating the Ducks is now small task - but there’s some definitely value in betting on the Utes right now at this number. Utah’s defense is allowing just 12.2 points per game and their 232.8 yards allowed per game are the fourth-best in the country.

Baylor finds themselves in a similar scenario as Minnesota. An undefeated team from a Power 5 conference that simply isn’t getting the national recognition right now - despite the perfect record thus far. Baylor has its toughest game of the year coming up this weekend, though, when they host Oklahoma - and a win in that match-up would virtually give them a clear path towards the Big 12 title. Again, the committee can’t ignore an undefeated team from a power conference when deciding on the top four teams in the country - making Baylor a nice value bet right now. Many people won’t expect Baylor to have a chance vs. LSU, Clemson or Ohio State in a potential Playoff match-up - but we’ve seen crazier things happen. The Bears have one of the best defenses in the country, allowing just 19 points per game in the Big 12 this season. They will be a tough match-up for any opposing team and could give the favorites a scare if they do indeed finish the season undefeated.