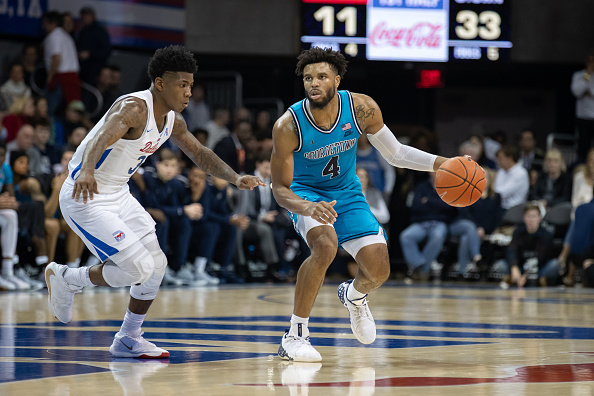 Who’s up for some college hoops betting tonight? With the college football regular season now over, Saturdays are now owned by CBB and we’re not complaining. This week’s Saturday slate is chalk full of Top 25 teams in action and entertaining games, totals and spreads that we can take advantage of! All odds, totals and spreads referenced here are taken from the Westgate Superbook at the time of this writing. Let’s dive in!

The Hoyas (6-3) are dealing with a ton of roster turnover lately and yet the team hasn’t skipped a beat. Since starting point guard James Akinjo and key bench player Josh LeBlanc left the program earlier this month, Georgetown has won both its road games without them - a six-point win at Oklahoma State and a 17-point win at SMU. The journey will now get tougher for head coach Patrick Ewing as two more reserves will transfer away in the wake of a current legal investigation - Galen Alexander and Myron Gardner are both gone now too. The Hoyas now have only seven scholarship players on the team - but the turmoil has oddly strengthened the team as sharpshooter Mac McClung and 7-footer Omer Yurtseven take on bigger roles. Even with a light bench, we’re taking the home favorites to cover today against a Syracuse team that has yet to prove itself against better competition this season. The Orange (5-4) have lost to every team at their level or better and each one wasn’t really close. ‘Cuse lost by 14 to Virginia, by 14 to Oklahoma State, by 11 to Penn State and by 14 to Iowa.

Despite a hot start to the season, Penn State (8-2) proved they are for real on Tuesday with a home victory over 4th-ranked Maryland. Although that win came on the heels of their 32-point road loss to Ohio State, the Nittany Lions now have solid non-conference W’s against Syracuse, Georgetown, Yale and Wake Forest. Today, PSU has yet another non-con test against Alabama - a team that has lost to almost every notable opponent on their schedule thus far. The Crimson Tide (4-4) have losses to Iowa State, North Carolina, Rhode Island and Penn so far and their best win was against Furman - so put whatever stock you want into that. The factor that could push this game in Penn State’s favor when it comes to the spread is the fast tempo expected. PSU plays at the 42nd-fastest pace in the country while Alabama runs at the 12th-fastest. This quick tempo on both ends could cause this one to get out of hand for the underdog visitors. When Bama played against other fast-paced teams this season, they lost big - by 15 to Iowa State, by 14 to Rhode Island and by nine to UNC. Penn State’s 24th-ranked defense (per KenPom) can create turnovers and score quickly on fast breaks - and it will be tough for Alabama to keep it close in the end.

Seton Hall (6-3) has been very impressive this season, but they now have to get by without one of their main contributors on both ends. Center Sandro Mamukelashvili is out for the next couple months with a fractured wrist and this is a huge loss in the Pirates’ frontcourt. The 6-foot-11 junior played just five minutes in the last game vs. Iowa State before he left with the injury - and Seton Hall ended up losing by 10 on the road. The disadvantage in the paint was a main factor in the loss and it resulted in stud guard Myles Powell having to do a lot more offensively. Without Mamukelashvili today, Seton Hall will have a tough time on the boards against Rutgers who boast a 6-foot-11 center of their own in Myles Johnson. The Scarlet Knights (7-3) should be able to control the rebounding edge in this matchup and it should help spur a home upset. Rutgers just pulled off a home win over Wisconsin last game and they have the defensive-minded guards to limit Powell offensively today. If Rutgers can successfully do that, then an outright win is certainly in the cards.

This matchup is arguably the best game on today’s CBB slate and we’re going with the higher ranked visitors to at least cover the 3-point spread - and possibly pull off an impressive win. Playing tough opponents away from home is nothing new for Gonzaga this season as they have already beaten Texas A&M and Washington in true road games and also defeated Oregon in overtime on a neutral court. According to KenPom’s ratings, the Zags have the 6th-best offense and 38th-best defense in the country this season. Arizona (10-1) is also statistically good so far, with the 13th-best offense and 34th-best defense - but they are not as battle-tested as Gonzaga. The Wildcats have only played two teams rated 90th or higher by KenPom this season - they beat Illinois in the second game of the year but lost to Baylor just a week ago. Gonzaga compares pretty evenly to Baylor right now and this game could go in a similar fashion. The Zags’ strong frontcourt of talented forwards have the upper hand against Arizona’s inexperienced lineup - and they have the size and shooting combo that will be tough to keep pace with.