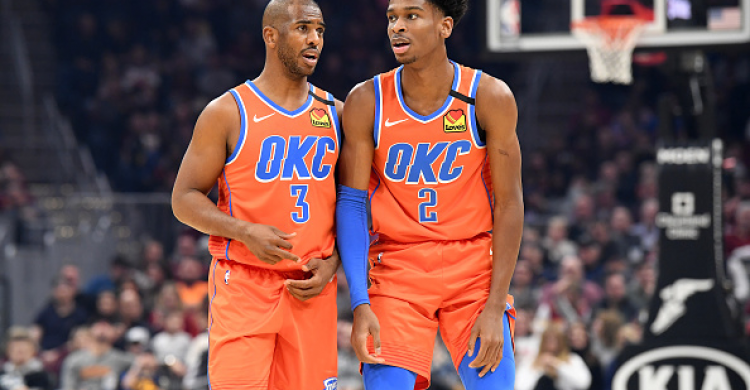 Who’s up for some hoops betting today? We’re now fully entrenched in the NBA and college basketball seasons and it’s time to take advantage of the recent trends, stats, and spreads in both sports. All odds, totals and spreads referenced here are taken from the Westgate Superbook at the time of this writing. Feel free to search around other sportsbooks to find the best possible spread or total. Let’s dive in!

This matchup features the rare instance of both teams playing the second legs of a back-to-back. Oddly enough though, the Thunder may have a slight advantage with this scheduling even as the road team tonight. OKC just lost by seven in Philadelphia last night but it’s only a short trip across state lines for tonight’s game in Brooklyn. The Nets, meanwhile, lost by 12 in Orlando last night and likely got in late with an overnight flight. Plus, Brooklyn is struggling lately with a current six-game losing streak and the injury rumors of Kyrie Irving looming over their heads. The Thunder are the better team this season and they deserve to be the road favorites in this one, and they should be able to win comfortably. OKC has won nine of its last 11 and were close to pulling out the upset last night in Philly.

Alright, obviously the Lakers are miles better than the Knicks this season as one team is literally one of the league’s worst while the other is championship-or-bust. However, New York should keep it close enough by the final whistle to cover this big spread. The Lakers, as good as they are, aren’t blowing teams out lately and seem content to cruise in the fourth quarter while letting opponents hang around. On Sunday, LA only beat the Pistons by seven and in their current five-game winning streak only one of those victories came by more than 10 points. Plus, the Knicks just lost by only three to the Clippers on Sunday and haven’t lost by more than eight in each of their last three losses. It’s also worth noting that the Knicks have had the advantage of staying in Los Angeles for the past couple nights which should benefit them in rest and preparation. With that they have had the chance to already get in a night out on the town and can get a good night’s rest for this matchup.

Although Maryland is coming off an impressive 16-point home over Indiana and have been ranked inside the top 25 all year, it remains to be seen how good the Terps really are. They’ve lost their two toughest games this season, at Penn State and at Seton Hall in December, and are now entering a tough stretch that includes matchups vs. Ohio State, Iowa, Wisconsin and Purdue. KenPom and all the AP voters love this Maryland team right now, but they’ve yet to truly prove they can win against some of the best teams in the country. Meanwhile, Ohio State is very much battle-tested with wins against Kentucky and Penn State in the past month and close losses to West Virginia and Wisconsin in their past two games. According to KenPom’s ratings, the Buckeyes are better on both ends of the floor than the Terps this year with the 11th-best offense and 6th-best defense compared to Maryland’s 20th-best offense and 11th-best defense. It’s understandable that Ohio State is a road dog tonight, but they are the better team on paper and this is the type of team that could be poised to buck the trend of Big Ten teams winning at home so far this year. The Terps’ undersized frontcourt with little depth will have a ton of trouble trying to contain OSU big man Kaleb Wesson in the paint and that will be the deciding factor.

The Hawkeyes are coming off a tough three point loss to Penn State over the weekend, but they will be ready to bounce back in a big way tonight with an easy win on the road. Iowa boasts the second-best offense in the country according to KenPom, and their quick tempo on offense is tough to keep pace with for opposing teams. Meanwhile, Nebraska is arguably the worst team in the Big Ten and they are coming off a 17-point loss at home to a Rutgers team that lost one of its best players to injury (Geo Baker) right before tip. The Cornhuskers have also already lost big to a ton of notable opponents, including Friday’s double-digit loss to Rutgers, a 19-point loss to Creighton, a 17-point loss to Georgia Tech, and a 19-point loss to George Mason. Iowa is a lot better than all of those teams and they present the toughest matchup to date for Nebraska. This seven point spread seems way too small even for a Big Ten team on the road.