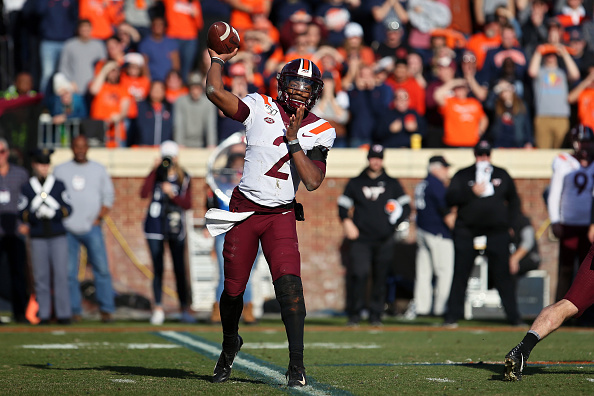 Dan Servodidio pores over the data to bring you his best for this Saturday's College Football slate of games to help you cash those tickets!

We’re now into Week 8 of the college football season and we get to add another Power 5 conference to the action with the Big Ten starting up this weekend. Last week, we went 2-2 yet again with our best bets and the record now stands at 9-7 through four weeks of picks. Let’s jump right back in for another exciting slate of CFB games this weekend!

Note: the following picks are made against betting odds taken from DraftKings Sportsbook as of Thursday night.

If you’ve followed college football this season, it’s no secret how bad Kansas is in 2020.

The 0-4 Jayhawks have lost by an average of 31.3 PPG to Big 12 opponents thus far and also lost by 15 to Coastal Carolina to begin the year. They didn’t cover a spread all season that would’ve continued last week vs. West Virginia if not for a kick return TD by Pooka Williams in the final minutes.

Now, Kansas could be even worse after Williams opted out for the remainder of the season - and the offense will be without its clear-cut best player for the first time this Saturday.

Meanwhile, it’s very telling that Vegas still has K-State as a three-TD favorite despite starting a freshman QB for a second straight game. Will Howard is in at QB with Skylar Thompson out, and the Wildcats still pulled out the road win over TCU last week.

This Kansas State offense should have no problem scoring multiple times against a horrendous Kansas defense. Plus, the Jayhawks will have tons of trouble scoring on their own with Pooka Williams gone. Barring another last-minute score, Kansas State should blow out their in-state rivals and cover this massive spread.

Sometimes the matchup tells the whole story. In this case, it’s the run game from both ends. Virginia Tech’s offense runs the ball nearly 70% of the time and they do it very well. The rushing duo of bell-cow back Khalil Herbert and dual-threat QB Hendon Hooker have lit up opposing defenses since Hooker returned two weeks ago. The Hokies have scored 40 or more points in back-to-back games with Hooker back healthy and they are coming off an impressive 40-14 win over Boston College a week ago.

On the other side, Wake Forest cannot stop the run at all on defense. The Demon Deacons are allowing nearly 200 rushing yards per game and have given up nine rushing scores through four games. This is not a good matchup for them vs. a Tech offense that can run the ball as well as any team in the country. Wake is coming off a win over Virginia - which likely has Vegas putting this line right in the area of a back-door cover possibility. Back the road favorites, though, and trust the VT running game to dominate.

LSU has fallen far from its national title run a year ago. It started with an opening-week home loss to Mississippi State and continued with a road loss to below-average Missouri last time out. This team lost a ton of talent to the NFL and opt-outs and it currently has the worst statistical SEC pass defense so far.

Maybe the Tigers will benefit from having a week off following last Saturday’s game cancellation due to Florida’s COVID outbreak. However, LSU will now have to deal with an injury to starting QB Myles Brennan - which will force freshman TJ Finley to start this week.

The Gamecocks are coming off an impressive win over Auburn and they proved formidable against Tennessee and Florida to begin the season as well. South Carolina’s offense is built on a strong running attack with bell-cow RB Kevin Harris helping the team control the clock and keep opposing offenses off the field. That happened last week vs. Auburn and it’ll probably be the case again vs. LSU this week. Again, the unproven QB situation for LSU is a big factor here, and even if SC loses - it will be by less than a TD.

The Big Ten is finally back - so let’s jump right in with the conference’s best matchup this weekend between two Top 25 teams.

Admittedly, this is an odd line to have the visiting Wolverines as the road favorites and it seems like Minnesota is being disrespected here. The Golden Gophers are coming off an 11-2 season and return QB Tanner Morgan and star WR Rashod Bateman (as well as seven other starters) from an offense that was high-scoring a year ago.

There are questions on defense for Minnesota, sure, but opposing teams will have to keep pace with this quick-strike offense if they want to win.

The issue for Michigan, though, is that it might take time to figure out what they have offensively.

The Wolverines have a new starting QB in redshirt sophomore Joe Milton - and he’ll have to play behind an offensive line that lost four starters to the NFL this offseason. Milton has a big arm, but the unproven talent in his WR corps is a worry.

Michigan will be without stud Nico Collins, who opted out before the season. It may take a game or two for Michigan offense’s to prove it can hang with the best in the Big Ten - and keeping pace with Minnesota is not a great opening matchup.

The Gophers will be hyped to win on national TV with College Gameday in town - and they should not be underdogs here.