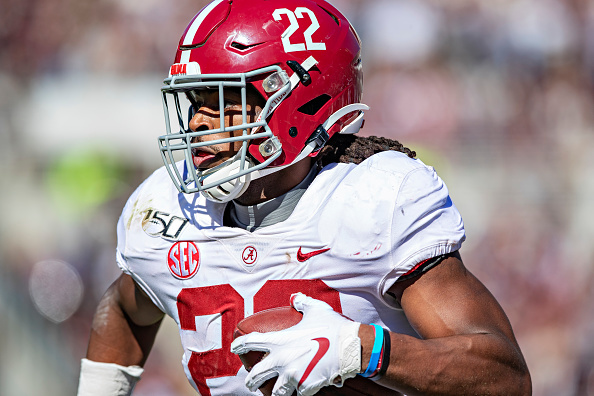 Dan Servodidio pores over the data to bring you his best for this Saturday's College Football slate of games to help you cash those tickets!

Even with a decent amount of COVID cancellations, there are plenty of Top 25 teams in action and we’ll have a fun Saturday of games all day long. After a winning record last week, let’s jump in and pick out some winners for Week 13 in CFB.

As always, the following betting odds are taken from DraftKings Sportsbook as of Friday night.

The Terps finally return to action after the team has been off the last two weeks due to COVID cancellations. That fact shouldn’t be ignored here because we’ve seen multiple teams look a bit flat in their next game following a longer layoff than usual due to COVID postponements this season. Plus, facing a good team like Indiana - who easily could’ve beaten Ohio State last week - is a tough task as a first game back for Maryland.

The Hoosiers offense will be looking to bounce back with an easy win against a terrible Terps defense. Plus, Indiana’s defense has been turnover-happy this year (including three picks off Buckeyes’ QB Justin Fields last week), which could cause some issues for young Maryland QB Taulia Tagovailoa. Indiana should win this one comfortably - by at least two touchdowns.

In case you didn’t know, Syracuse is horrendous this season and one of the worst Power 5 teams right next to Kansas. The Orange are 1-8 and coming off a 30-0 loss to Louisville where they idly failed to score a single point against a below-average Cardinals defense that’s been bleeding points all year.

NC State should have no problem winning this one easy by more than two touchdowns - especially following the Wolfpack’s tough one-point win over Liberty a week ago. This offense should dominate and put plenty of distance early to make it difficult for ‘Cuse to even get close by the final whistle.

One of the greatest rivalries in college football is this weekend - so why not get some action in while watching the mid-afternoon classic?

The big news ahead of this matchups is that Alabama head coach Nick Saban will miss the game due to a positive COVID test - which is something that cannot be overlooked no matter how much better Alabama is on paper compared to Auburn.

Obviously ‘Bama should win this one easy, but it seems like the visiting Tigers will keep it closer than Vegas is suggesting at more than a three-touchdown spread. QB Mac Jones, RB Najee Harris and the Tide offense should be dominant as usual but the defense has been an issue at times and could let Auburn hang around. Any rivalry game is usually closely contested and Auburn just isn’t 25 points worse than Alabama right now.

Remember when LSU enjoyed a 50-7 domination in this very same matchup a year ago? Obviously both programs have gone in different directions this season and it should be an easy win for the home Texas A&M squad.

With their top five national ranking, the Aggies are just on the outside looking in for the College Football Playoff and could easily find themselves in the mix if things go right. Meanwhile, LSU can’t wait for 2020 to be over as they’ve limped through their SEC schedule - with numerous teams pounding their subpar defense all year - in one of the worst defending championship seasons in a while. Texas A&M has the offense to take advantage of this matchup against LSU’s bad defense and it’s easy to imagine them winning by multiple touchdowns with a defense of their own that could shut down the visiting Tigers.

Give me Take A&M to cover the spread.