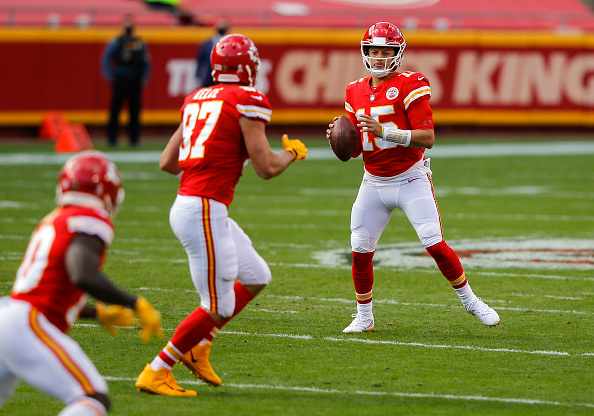 Steve Pimental pores through the data to bring you his top Monkey Knife Fight prop plays for Week 11 of the Fantasy Football NFL season.

It felt good to bounce back last week, as we won our Rapid Fire contest and nearly pulled out the longshot as well. I should have known better than to trust James Conner, but hopefully, I can avoid that this week.

The first time these teams faced off, the Raiders pulled off arguably the biggest upset of the season. Mahomes had 340 passing yards on 43 attempts, while Derek Carr was even better with 347 passing yards on 31 attempts. Mahomes has topped 315.5 passing yards in each of his last two games, and while it won’t always be thus, I don’t expect Kansas City to suddenly start running the ball a ton when they don’t have to.

Derek Carr has attempted 25 pass attempts or fewer in three straight games, but it is hard to imagine he will have that luxury against Kansas City.

Michael Thomas was great last season with Teddy Bridgewater at quarterback, and my expectation is that he will be great with Jameis Winston, but it wouldn’t be shocking to see a drop off in production, especially initially. Thomas only has 88 receiving yards total in his two games since returning from injury, while Julio has at least 54 yards in four straight games, including 95+ in three of those.

Elliott hasn’t scored since Week 5, but I think Andy Dalton’s return coming off a bye facing the Vikings will do a lot to help this offense.

On the other side, Dalvin Cook and Adam Thielen have combined for 22 touchdowns. In the eight games they have played together, they have scored at least one touchdown in every game this season, with at least two touchdowns in seven of those.

I’m really tempted to try to go over 2.5 touchdowns with this group.

It is possible the Patriots come out and give James White the ball 20 times on Sunday, but Harris has looked good of late, and Houston cannot stop the run.

Jakobi Meyers has 6+ receptions in two of his three games since Julian Edelman went out, and it doesn’t look like Isaiah Ford is cutting into Meyers’s targets anytime soon.

Cam probably should be able to top 211 passing yards against Houston’s defense, but he has only done it twice in eight games, and I think New England will be effective enough running that they won’t need to. The only time Watson has gone under 280 passing yards since Bill O’Brien’s firing was last week in the wind in Cleveland.

I don’t really fear the Patriot’s defense, and I don’t trust Houston’s run game to take the ball out of Watson’s hands. I probably feel worst about the Fuller call, but he has been under that total in five of his nine games this season, and I think the Patriots will try to make Watson beat them underneath.