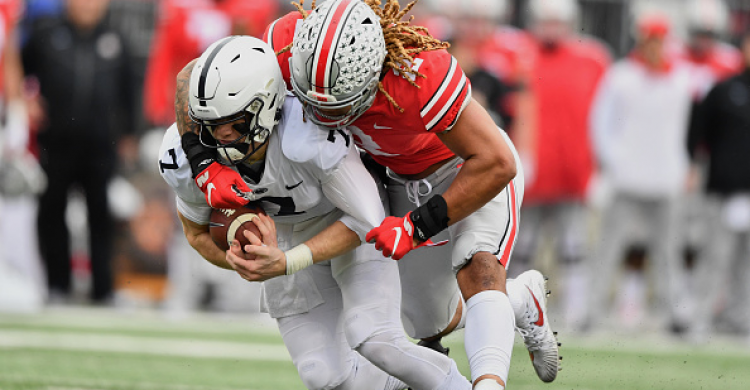 As the college football calendar flips to the final weekend before bowl season, it’s time to focus on which teams can realistically win the national championship before the final CFP rankings are announced. The major conference championship games on Friday night and Saturday will definitely play a huge role in determining which four teams will be in the Playoff. Assuming they each win this weekend, all of Ohio State, Clemson and LSU are locked into the top three spots while the fourth is very much up for grabs. There’s some really good value right now if you want to bet on teams like Utah and Oklahoma to win the title. They are two programs who are on the outside looking in currently but could be in the conversation by this time next week. All odds referenced here are taken from Bovada as of Thursday evening.

The Buckeyes have been number one in the CFP rankings each of the past two weeks and it seems pretty likely they remain there if they and LSU both win this weekend. Ohio State is 16.5-point favorites over Wisconsin in Saturday’s Big Ten championship game and it would probably take an upset for them to move down in the rankings. The CFP committee seems to value Ohio State over LSU (the previous top team) and getting the number one spot in the final rankings would go a long way because facing the fourth team in the Playoff is a big advantage compared to a matchup with 3rd-ranked Clemson. There’s obviously not much value in betting on the Buckeyes right now, but they will have the best chance at reaching the title game if they are indeed the top-ranked team and a favorable matchup vs. either Utah or Oklahoma in the semis.

It was somewhat surprising to see LSU drop to second in the CFP rankings two weeks ago despite remaining undefeated after previously being the number one squad. The Tigers will have the toughest test this weekend among the top three teams, they are only 6.5-point favorites over number four Georgia in the SEC title game. Even if LSU loses the game, they should still make the Playoff with one-loss, but that may mean that they move to the 4th spot with a matchup vs. Ohio State instead of Clemson. There’s no denying how good the LSU offense is with Heisman favorite Joe Burrow headlining the attack. The only blemish for them is a defense that tends to allow a decent amount of points and could have trouble in a matchup with Clemson’s offense. Still, the Tigers own probably the best win of anyone this season with a road victory over Alabama earlier this year. If you think LSU is the best team in the country, not an unpopular opinion despite their number two ranking, then there’s value in betting them now.

The Tigers have been disrespected all season long as the AP and CFP rankings have yet to move them higher than number three because they play in the less-competitive ACC. However, Clemson is still the reigning champs and have won two titles in the last three years, both wins coming against top-ranked Alabama teams. Even though they are playing in the easier conference than either Ohio State or LSU, the Tigers are blowing out every opponent in their way and are ramping up their offense at the right time. To put it simply, we just can’t rule out Clemson reaching the title game for the fourth time in five years, even if they will have the tougher semifinal matchup. The Tigers seem locked into the third spot in the Playoff no matter what happens in the ACC title game this weekend where they are 28.5-point favorites over Virginia. Like LSU, if you think Clemson is the best team in the country then there’s certainly some value in betting on them at a discounted number right now.

As we mentioned earlier, the fourth spot in the Playoff is totally up for grabs and that final berth is completely dependent on what happens this weekend in the conference title games. Georgia is fourth right now but they have a tough matchup in the SEC championship against undefeated LSU. The only way that the Bulldogs make the Playoff is if they win on Saturday because if they lose, either Utah, Oklahoma or Baylor probably jump ahead of them in the rankings. If they do win, though, anything is possible in a semifinal matchup and beyond, making them a very attractive bet. Remember, Georgia reached the title game two years ago and ultimately lost to Alabama. The Bulldogs still have some players that were on that team, including quarterback Jake Fromm, so they know what it takes to navigate the Playoff.

The Utes are probably the best team in college football that no one knows about. A lot of that probably has to do with Utah playing late on Saturday nights against weak competition in the Pac-12. However, we may get to see just how good they are if they reach the Playoff. Utah, currently fifth in the rankings, have a Friday night matchup against Oregon in the Pac-12 title game where they are 6.5-point favorites. Even if they win that game, Utah will need Georgia to lose the following day in the SEC championship to even reach the Playoff. They do seem to have the advantage over Oklahoma as of now because the CFP committee has put the Utes ahead of the current Big 12 leaders each of the past five rankings. So if Utah makes it in as the fourth seed, the door is open for them to prove to the country how real they are. They have one of the best defenses in the country, coming in at 4th in the nation in points allowed per game (10.9), first in rushing yards allowed (55.9 per game) and third in total yards allowed (227 per game). Utah would certainly be an intriguing matchup for Ohio State if that’s the 1-4 matchup in the semifinals.

Admittedly, Oklahoma needs a ton of help to reach the Playoff. First and foremost, they need to beat Baylor in the Big 12 title game on Saturday. Even if they do that, though, they also likely need both Georgia and Utah to lose their own conference championships to sneak into the CFP as the number four team. If they do get in, though, we can’t rule out the high-powered Sooners’ offense in any semifinal or title game. Especially when you have Jalen Hurts under center, a quarterback who has significant postseason experience with Alabama. Obviously a lot of things have to go Oklahoma’s way, but if they do there’s some really good value in betting on the Sooners to ultimately win the title.